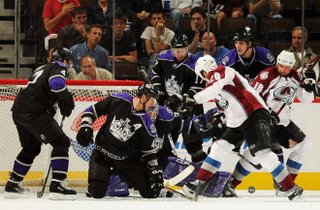 I have no idea what's going on in this picture.

I’ve already written a lot about Cammy and Lubo this off-season, so you can check those out here and here. They were our two best players last year and we can only hope that they keep it up. One thing to note: Lubo had to switch defensive sides to accommodate Rob Blake last year and had a little trouble with it, at least in his estimation. That shouldn’t be a problem this year. 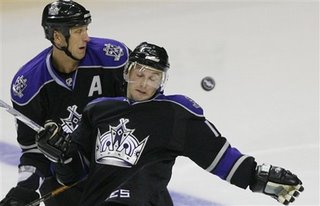 (Looking around for help): What the hell? This is hockey, right?

(Update: I went to SI.com to link to the article and discovered Eliot has a new article about Bernier. I think someone warned him I was going to make fun of him. Whatever, the article is terribly written anyway. It's totally obvious that he just read a few articles and then put them into his own words.)

I’m not excited about Jonathan Bernier. Really, I’m not. Sure, he’s barely 19 and played extremely well at Frozen Fury. Sure, we haven’t a had real homegrown goaltender since… well, ever. But still, I’m not excited; he’s only 19 and will probably get sent down after his 9 games are up. Yes, I’m smiling, but it’s not about him.