I was pretty pissed when Rob Blake left the Kings. He was the captain, the face, and the best player for my team, and I felt that he owed us more than we were given. I now look back and find that position a little ridiculous as I’ve become more jaded to the financial workings of professional sports, but I felt then that he had personally kicked me in the balls. The playoffs that year (when Blake and the Avalanche defeated the Kings in 7 games and went on to win the Cup) sealed the betrayal and I became a card-carrying member of the "I Hate Blake" Club. (I was the secretary. Here's some notes from one meeting: "So, does everyone still hate Blake?" "Yeah, that guy sucks!" "Alright, meeting adjourned!") 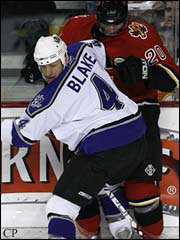 What a surprise, Blake's holding someone.

My brother Nick, on the other hand, stayed firmly in Blake’s corner through the ordeal. I think he took the fan’s booing of Blake harder than Blake himself. Blake is his Conroy/Hrudey/Pahlsson all rolled into one (but Blake's actually good) and I constantly had to listen to his arguments why Blake was still awesome and King’s fans were dumb. I know he was pretty stoked when he found out Blake was coming back; he acted like Omarion after they won the big dance-off in You Got Served when he found out (in that he was all excited but everyone else thought he was kind of gay and embarrassing). 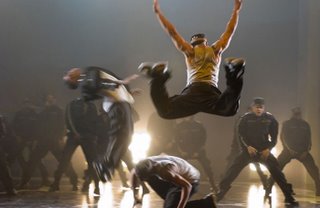 Nick, please, there's no need to get that excited.

When I found out Blake was coming back this off-season, I expected to be either ecstatic or pissed, but instead I was apathetic. I didn’t really care too much about Blake one way or the other anymore. Even as the season went on, I didn’t get too emotional about his play. I mean, I liked when he was in front of the net on the power play (there is not a person in the NHL who can move him) and I laughed when he cross-checked yet another guy in the back on the penalty kill. I also hated that he was so slow now and seemed a little out of place in the "New NHL." Overall, though, if you asked me my general impression of his season, I’d have to throw my arms up and say, "I don’t fuckin’ know." Then you’d be like, "I didn’t know people literally threw their arms up in the air when they were frustrated," and I’d punch you in the mouth, you snide fuck. I guess my feelings on Blake are so confused because I constantly try to view his contributions to the team through actual play, and his signing was never about that. If he makes the team better, great, but he’s really more important than that. Signing Blake was about making him feel at home in a place where we probably treated him unfairly because we expected him to love us as much as we loved him. That’s unreasonable to ask of any professional athlete. The booing of Blake was a dark period in King’s history (and for me) and I like to think that his signing healed that a little. 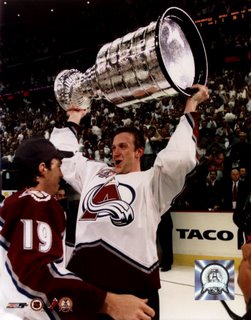 Blake will probably be the captain this season and an important special teams player on defense. I’d like to see him play a little more stay-at-home defense because he’s not quite quick enough to get back in position like he used to. In the clubhouse, blah blah blah motivational leader and important mentor to young defensemen who apparently didn't have dads blah blah blah. With Visnovsky, Preissing, and Johnson, the Kings have enough offensive talent; what they need is a rock-solid defenseman in the Matty Norstrom mold. If Blake can change his game a little, I think he can extend his career a few more years. I’m still conflicted on Blake (as you can probably tell by the rambling screed above). Is he worth $6 million this year for his play? No, not at all. But if signing Blake heals a fan base, makes a player feel welcome, and ensures that he will enter the Hall of Fame as a King, I'm okay with it. If goes in as an Avalanche, though... well, I know exactly how I'd feel about that.

(Next Up: Alex Frolov)