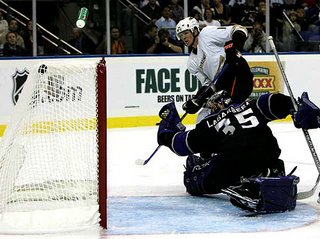 
The Kings and the Ducks apparently didn’t like the parts they were playing in game 1 and decided to switch scripts in game 2. The Ducks just dominated down low and in the corners of game 2, pretty much doing whatever they wanted against the Jack Johnson-Jaroslav Modry line. They made a conscious decision to get after Lubomir Visnovsky every time he had the puck, and I think it rattled him a little bit. They also decided to get inside Anze Kopitar’s jersey, which made it very difficult for him to get anything going. Labarbera didn't play that bad but he was left out to dry 3 times. (The last goal was just him being a big slow idiot.)


The only thing that was good about the game was Cammalleri’s goal (which puts him on pace for 123 this season) and Scott Thornton beating up George Parros. Overall, the Ducks adjusted, while the Kings did not. That’s okay, it’s only 1 game. I hope they don’t play like that again, though, because they’re not good enough that they can afford to play less than their best and still win.


(My favorite moment? When the announcers finished up their pre-game spiel and sent it back to the studio, the play-by-play guy said, "Like they say in England, 'Tally Ho!' (Awkward pause.) Do they say that?")

So now the Kings (and me) have a little time off until they play Saturday night. They have to get rid of one more player (I’m thinking Zeiler) to trim the roster down to 23. They may send Willsie down since he didn't play either game in London, but I think it’d just be easier to send down Zeiler since he won’t have to clear waivers. Enjoy the time off folks; it’s going to be an emotionally draining season.

(Oh, and Earl thinks he's so great for being on the radio, but I once talked to Jimmy Fox. He said, "Get the hell away from me!" That Jimmy, always kidding.)


Also, this is apropos of nothing, but according to Jon Heyman of SI.com, the Dodgers are interested in hiring Dusty Baker. In case you don’t follow baseball, this is the equivalent of the Penguins hiring Mike Keenan. The Dodgers are filled with young talent and Dusty Baker is notorious for being terrible with rookies. See you later, Chad Billingsley; enjoy your torn labrum.