After a road trip that can best be described as "predictably brutal", the Ducks finally raise their banners tonight in front of the home crowd--Scott and Teemu are supposed to be in attendance, so that should be an interesting ceremony, at least. I'm not going to overcriticize the team for the lackluster start, even though the last three cup-winners have all had excellent starts to their year: Tampa Bay took points in 14 of its first 16 games (11-2-3), Carolina earned points in 13 of 16 (12-3-1), and last year's Ducks got points in all 16 (12-0-4).

This year's Ducks have only taken points in 2 out of its first 5 games, but I'm staying optimistic. Here's some semi-random thoughts I've been mulling over: 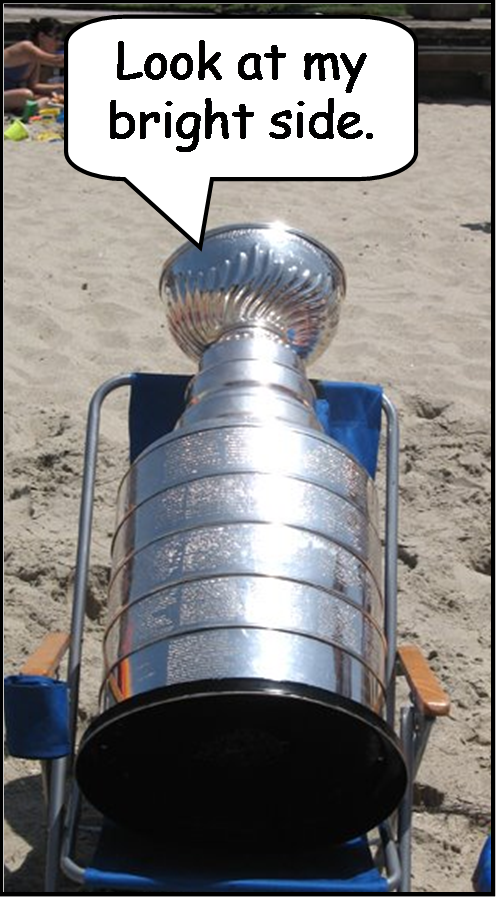 1. Last year's Senators recovered from a brutal start to make the cup finals, so a rough start isn't insurmountable. Ottawa took points in only 7 of its first 16, but unlike the Ducks so far, the Senators' goal-differential was pretty promising. Just a side note on the Sens' top line: it took them less than 2 games this season to score as many goals and points as they got in all 5 games against the Ducks last spring. Just sayin'.

2. Fortunately, the rest of the Pacific Division has started slowly as well. The Ducks will have a games-in-hand issue as the season goes on, but I'm surprised nobody in the division has passed the Ducks in the standings yet. Last year, the Pacific produced three 107-point teams; so far this year nobody in the division sits above the .500 mark and every team is getting outscored.

3. The main thing I can say about the team's rough start was that it was entirely predictable. The team had a lengthy spring, with the cup hangover and semi-retirements that tend to follow. They had a severely shortened summer and an abbreviated camp to accomodate two September games overseas. Then they hurried back to open the North American season with 3 openers in 4 nights.

I made the graphic to the left just to show the whimsy of the scheduling discrepancy thus far--after tonight's games, the two teams with the shortest summers will have hurried to play more games than any other team, and the Ducks in particular will have played twice as many games as more than 2/3 the league.

Besides the schedule impacting results, there is also the matter of personnel: compared to last year's squad, the team is short a #1 goaltender, a top-scoring forward, a top-scoring defenseman, a top-scoring rookie, a top-shutdown center, and a top-UFA defenseman. And really, all that's been available to replace them has been Todd Bertuzzi, Shane Hnidy, and rookies.

I guess my main point here is that when I evaluate NHL teams, I don't often hold them to irrelevant results. Last season I often ignored a 2-7-2 stretch in January when Giguere, Pronger, Beauchemin, Marchant, and Bryzgalov all had simultaneous injuries. The season before I isolated results for the Sharks after they inserted Thornton and Toskala, and for the Ducks after they shed Fedorov, Sykora, Carney, and Ozolinsh.

So I'm not reading anything into this ridiculously-scheduled start. Instead, I still look forward to what sort of success (or lineup, really) that these Ducks project to have with at least the additions of Giguere, Schneider, and Pahlsson.

4. Just for historical comparison, after the Ducks' first visit to the cup finals, they started the next season with an 0-4-1 start, so at least things could be worse. The first five games of 2003-04 were a truly brutal start: 5 goals-for and 16 goals-against; at least this year's squad has scored 11. Coincidentally, the 5th game in that Oct. 03 slump was the last time the Bruins visited Anaheim.

Sidenote #1: I'll give Boston credit for also starting this season with some tough matchups--they are the visitor for the home openers in Dallas, Anaheim, and San Jose. However, those openers are spread out, and after this trip Boston won't leave the eastern time zone again.

Sidenote #2: I actually was in attendance for that Ducks-Bruins game back in 2003. I remember that game because I managed to pull my wallet out at a beer stand, walk away with a beer in each hand, and not discover my missing wallet until I got home. So if you found a wallet that night, you know the secret identity of Earl Sleek (you bastard).

5. Back to this season, I'm at least hopeful that the Ducks' pathetic start convinces Scott and Teemu that they're still useful for this team. If I'm Brian Burke, I'm really hoping each of them watches the Columbus video in particular. In case you missed it, that was the game where it took the Ducks 16 minutes to find out Pascal Leclaire was in the Blue Jacket net.

6. At least the on-ice problems thus far seem identifiable and fixable. First off, the PK desperately needs Pahlsson back--9 of the 16 goals they've surrendered have come on opposition power plays. Two players that have been particularly exposed: Ryan Getzlaf has played 12 shorthanded minutes with 4 goals against, and Francois Beauchemin in 29 minutes has been on the ice for 8 of the 9 PPGs-against.

As for goaltending, it's actually been quite stellar for the most part. Ilya Bryzgalov has started three games and only allowed one even-strength goal. Breezy's problem is that he's been victimized for eight power play goals-against, plus the Ducks have only offered him three total goals-for in support. I didn't catch all of the Pittsburgh game, but Hiller's impressed as well.

Prediction: Sorry I'm long-winded today, but in support of the Ducks I've flown on two red-eye flights within the last week, and I'm feeling the lack of proper bed-sleep. Anyway, the Ducks' only win this season came on the only game I didn't make a gameday post, but I know what's been the missing element: Sammy Pahlsson. He's a possibility to return for tonight's game, and that's good enough for me. Ducks 3, Bruins 2. Pahlsson, Perry, and Pahlsson.