Ducks Gameday—Wait, we gotta open the North American season too?!

Share All sharing options for: Ducks Gameday—Wait, we gotta open the North American season too?!

So, after starting the year in London, the Ducks now move on to a stretch of four straight home openers (including their own), all within the next week. They'll open Joe Louis Arena tonight, Nationwide Arena on Friday, Mellon Arena on Saturday, and Honda Center a week from now. I made the table below to demonstrate this (distances calculated using this site). For the first six games, the Ducks will travel an average of 1,945 miles per game.

I'm not whining about it, necessarily, but I'm not getting my hopes up too much either. Last year, the Ducks had only 3 regulation losses in their first 34 games; this year they'll have to work their tailfeathers off to avoid having 3 in their first 6.

As for tonight, why not get this gauntlet started with good old Detroit? The Ducks franchise has made the playoffs five times, and four of those times they've met up with the Red Wings. They're as drawn together as the this blog is to lame humor. Speaking of which, here's one of my favorite graphics from this last spring's series: 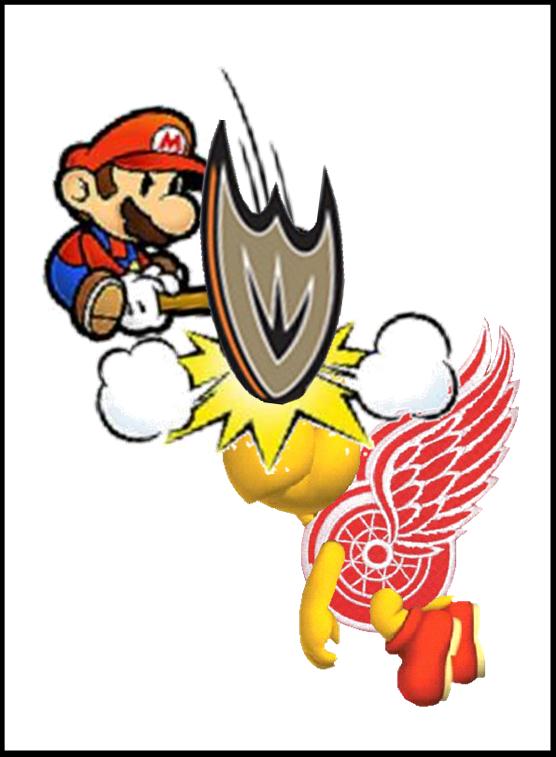 If my pal Damndaze is any indication, Red Wings fans hate the Ducks a ton--but I'm still unsure where the rivalry ranks among the Avs, Stars, and the rest. They hate J.S. Giguere for sweeping them in 2003. They hate Chris Pronger for eliminating them in 2006 and elbowing them in 2007. They hate Scott Niedermayer for his fluke goal off Lidstrom's stick to tie the game late in regulation of G5. They hate Teemu Selanne for finding a puck alone with Hasek in G5 overtime and roofing a backhand over the squirrely Czech. And they really hate that G5 was arguably the one game that decided the Cup. Even after that, they hate that the Ducks nabbed Schneider and Bertuzzi, who Damndaze at least thought were going to sign homer deals with Ken Holland.

So count on a motivated Wings crowd tonight--one that might like to demonstrate how a G5 might have gone without a Scott Niedermayer and without a Teemu Selanne. Also, this time they can enjoy the fact that Mathieu Schneider's injury tests the Ducks' depth instead of the Wings'.

Also worth noting: in 10 games against Detroit, Dustin Penner had 0 goals and 0 assists. That seems replaceable enough.

Prediction: Ducks 3, Red Wings 2. Goals by the three Ryans: Getzlaf, Carter, and Bobby. I don't even really know who the Ducks will be playing in net, but with 3 games in 4 nights, it's probably a good thing that Bryzgalov, Hiller, and Giguere are all possibilities.