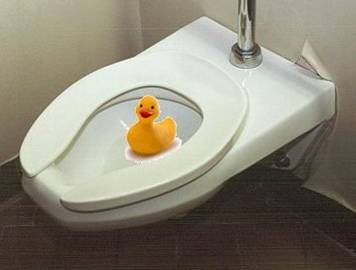 Sweet lord. The Ducks, tasked with holding up a one-goal lead for twelve minutes, managed to give up a shorthanded goal with a minute-and-a-half left before giving two points up to the Oilers' 2nd goalie in the shootout. The Oilers, of course, are the one team that the Ducks are least interested in giving two points to, because Anaheim holds their Penner first-round pick for next year.

The Ducks are pathetic in so many ways it's disgusting. And yeah there's help coming—Getzlaf, R. Niedermayer, Bertuzzi, and Schneider for sure, and we'll have to wait and see with S. Niedermayer and Selanne. The real tragedy is that this team figures to be be an awesome lineup if all its pieces came together, but when is it going to be too late? How long can it dig itself a hole among the NHL's worst? 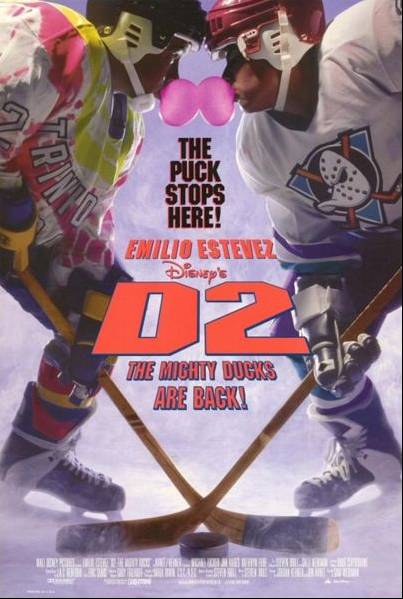 I hate to be the one to bring it up, but really this whole harsh fall-from-grace theme has already been played out on the big screen, and apparently our hopes for this year rest on the rest of the D2 script playing true. The story thus far:

A hockey team of castaways is thrust into the national spotlight following the success it achieved in the previous season. Ill-prepared for all the hype, they are embarrassed on and off the ice, and proceed to lose their temper and refuse to play well as a team.

In true Disney fashion, then, I'd expect the team to get bolstered with a few familiar faces (Scott & Teemu) and through some off-ice bonding, rediscover the meaning of teamwork in the face of adversity. In fact, I'm kind of hoping that the Ducks take this movie re-enactment to the limit.

Imagine: a second-period-intermission that really turns the shitty season around. After getting outworked and outscored for forty minutes, the team shockingly returns clad in their old eggplant-and-teal cartoon jerseys and teamed with some suddenly unretired-and-eligible superstars. Opponents, announcers, league lawyers, and fans are all shocked, but somehow in the name of drama it all gets allowed. The Re-Mightified Ducks then rediscover their identity and on-ice domination and pull off a memorable comeback win, before having to re-learn the lesson the following season.

I know throwing my hopes up against a Disney sequel script is idiotic, but at this point what choice do I have? The on-ice results are beyond disappointing; this squad bears zero resemblance both in personnel and performance to the team that cruised through last spring's playoffs. And while there still is some hope tied to the white knights named Niedermayer and Selanne, I'm not sure how excited they will be to pin their unretirement hopes on a team that seems to have lost its ability to manufacture a basic win.

A Hollywood-style ending is not out of the question for this Anaheim team, but the margin for error is deteriorating fast. Better start working on that knucklepuck, Giguere.