Kings Gameday: Looking Back to 2005

Share All sharing options for: Kings Gameday: Looking Back to 2005


(The Kings last beat the Dallas Stars on April 1, 2005. Here's what the Kings looked like back in that strange time, when madness ruled and I was still a twinkle in my father's eye.)

The Kings finally broke their three-game losing streak, defeating the Dallas Stars 1-0 last night. I keep waiting for the Stars to drop off, but I guess it isn’t going to be this year; next year, definitely. Book it. We always seem to have a little trouble against the Stars, but hopefully this means we can start a little run against them. The lone goal was scored by known hump and miserable bastard Jeremy Roenick, and I guess his skates were finally sharpened enough. I can’t wait until this season’s over and I never have to see this guy again. (If anyone ever signs this guy again, they’re complete morons.) Garon played well, once again showing flashes of brilliance. I think next year, when he has the #1 job all to himself, he’ll really step things up. 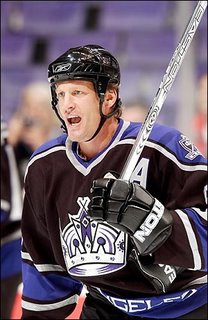 Hey, Roenick is talking, what a surprise.


The win moves the Kings into a tie for 9th along with San Jose, and I still have hope that we can make the playoffs. Not having Andy Murray here hurts, but John Torchetti seems to have the team in pretty good shape. Frolov has struggled a little bit since coming back from a shoulder injury, but I know he can turn it on and put some pucks in the net. If the Kings can get that Conroy-Demitra-Frolov line clicking again (which was the best line in hockey for a little while at the beginning of the season), then we can withstand the San Jose juggernaut. I think the team most likely to miss the playoffs is the Edmonton Oilers; even if the Oilers do manage to get in, they’ll probably be dispatched easily. I mean, it’s not like a team like the Sharks could ever lose to them, right?

Even if the Kings do make the playoffs, though, I’m not sure how good they’d be. They’d probably have a better chance if Terry Schiavo was in net. (Too soon?) I think, looking at the future, the Kings need to do a couple of things. First, they need to lock up Demitra. I know he’s injury-prone, but the guy can score. Putting him with Frolov will be excellent for his development. I also think they need to look for a defenseman who can play with Lubo and Norstrom. (Not Rob Blake; he sucks and there’s no way he’s worth the $4 million it will probably take to sign him.) If we need to trade someone for a defenseman, I’d look at Mike Cammalleri. Frolov and Dustin Brown (and maybe that Slovakian kid, Kopitar or whatever) are the future of this team, along with Tim Gleason on defense. Cammy is good, but I think he’s just too small to ever make an impact in the NHL. At best, he’s probably a 60 points-a-year player. 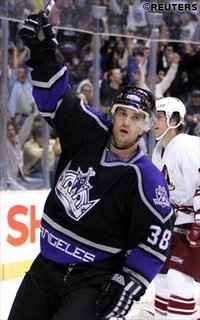 Demitra has to be on the Kings next year.

If the Kings don’t do much in the off-season, I see them fielding a team that looks like this:

Garon/LaBarbera (No, Vancouver fans, we’re not taking Cloutier off your hands)

I’d give Dave Taylor one more chance to turn this whole thing around. This is a good team that can do some damage in the playoffs if everyone stays healthy. If we can re-sign the guys we have this year and maybe get one more depth guy (I hear Brian Willsie is pretty good, he does have a career-high 19 goals this year), then I think we can make the playoffs.

Prediction: It's 2005 all over again, as the Kings win 1-0 and have a moment of silence for Pope John Paul II. Goal by Roenick.