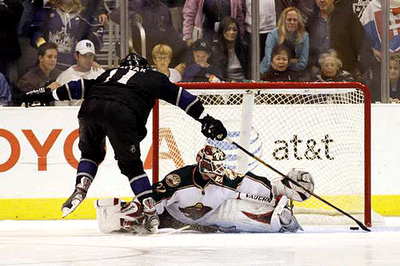 This picture makes my heart smile.

The Kings are coming off a good win against the Minnesota Wild. The win wasn’t good because they managed to beat a previously undefeated team, but because they deserved to win the game easily. The Kings shouldn’t have even let the Wild get into overtime or a shootout; if not for a bad goal let in by J.S. Aubin, they would have won in regulation. They even beat them in front of their mothers, which I found very satisfying. I know it makes me a bad person, but I hope it ruined their trip. Take that, Brian Rolston's mom!

Speaking of Aubin,I wasn’t too impressed by his performance on Tuesday. Besides the aforementioned bad goal, he looked a little stiff going side-to-side, resulting in a ridiculously lucky save (against Eric Belanger) that got a lot more pub than it deserved. Aubin has a little hitch in his movement, meaning he pulls his lead leg in before extending it back out when moving to the side. This typically hurts a goalie on rebounds and one-timers. The contrast is stark if you think about the way Bernier moved. (Hold on... sorry, got a little choked up there for a second.) Plus, my brother pointed out that he looks like Ricky Gervais. Still, I guess he wasn’t terrible, and that’s really all we needed on Tuesday. He's worth having in there if only because hearing Jimmy Fox say his name is hilarious.


The Kings meet up with the Calgary Flames tonight and Old friend Craig Conroy will be there. When I think about what the Kings need this season, I think they could really use another strong, defensively responsible center to play with Frolov. They could use… well, they could use Craig Conroy. Maybe I just want him on the team because I think he’s awesome. He just seems like the kind of guy where you talk to him and then all of a sudden you realize that being around him makes you feel better about yourself. (Does that make me sound crazy? I'm not crazy.) If he scored tonight I wouldn't cheer, but I think a little part of me might be happy.

Also with the Calgary Flames is old enemy Owen Nolan. I used to hate Owen Nolan back when he was on the Sharks. He always seemed like a guy who got credit for being "tough" when he was really just a dick. The guy even looks like an asshole:

Eff you too, Nolan.

See? He looks like the kind of guy who would drive on the shoulder of the freeway during a traffic jam. If he died in a fire I wouldn't cheer, but I think a little part of me might be happy.

I’m going to be gone this weekend (my friends are going hunting while I get drunk and rail against injustice and Jordin Tootoo), but I’m sure Earl & Co. will keep you entertained. As always, if the Kings get scored on and you hear a faint "Fuck!" carried by the wind, know that I am with you.