Much has been made in the hockey world of the start of the Columbus Blue Jackets, up until now a miserable hockey team and a black eye to the city of Columbus, the NHL, and the Earth. Part of me feels glad for Blue Jackets fans (congratulations, Keith!), but another, darker part of me wants to know why the Kings aren’t getting a piece of the action*. This is the same part of me that reads other fans’ message boards at Hockey’s Future to find any slight traces of disrespect towards the Kings, which I then rail against to my cat. (He doesn't care.) Seriously, though, if you look at the keys to the Blue Jacket's success, you'll see that the Kings have them trumped. To wit:

The main reason the Blue Jackets have been getting so much attention is because of the Canadian press’ undying fascination with Rick Nash. I’m not sure why. He seems okay, but not that great. I can think of 10 people under the age of 25 I'd rather have on my team than Nash. Besides, we also have a young Canadian goal scorer: Michael Silvio Lorenzo Cammalleri. Where’s his love? My only guess is that Canadians hate Italians. To be fair, everyone does, so I can't blame them.

Pascal Leclaire has been insanely good this pre-season, causing fantasy owners who used a high draft pick to draft Roberto Luongo, Mikka Kiprusoff (how awesome would it be if he had a .870 Sv. % the life of his contract?), and Martin Brodeur to shake their fists with rage. Still, Jason LaBarbera has been rather hot of late, recently winning defensive player of the week. Besides, Pascal Leclaire really, really looks like Cha-Ka From Land of the Lost. Seriously. I'm not dicking around. Look at 'em! The Blue Jackets win this one, but it’s not as big a landslide as you may think.

Adam Foote is getting paid $4.6 million this year. He also sucks. One astute Blue Jackets fan on Hockeysfuture.com said this:

"Multi acasions of half assed attempts to clear on the pen. Kill, one whice alomst lead to a goal. He is not putting in HALF he effort he shoudl be for the money hes making, and the "C" hes earned on his shirt"

I could add more about Foote, but that says it all, doesn’t it? But we also have a slow, overpaid defenseman, and we actually had him when he was good; I think we have it worse. 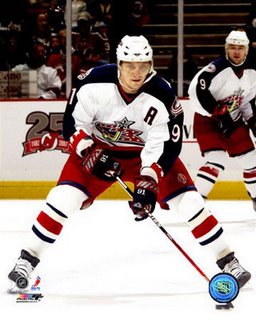 I have to give it to the Blue Jackets, they got us there.


I don’t see the Blue Jackets keeping this up. I mean, Michael Peca is their top center, for God’s sake. So far they have relied on the ridiculousness of their goaltending, and I don’t think a guy named after a wager and a pastry can keep it up over a full season. In Leclaire's most recent shutout he had 36 saves. That’s ridiculous and his little run ends tonight.


*It’s also always bothered me that Ohio takes exceptional pride in their role in the Civil War, like they sacrificed more than anyone else. You know who else took part in the Civil War? Every other fucking state in the North, and they didn’t have their southern half trying to secede the entire time. But I digress.