The Kings have a new website called LAKingsJunkie.com. It’s full of ATTITUDE and IN YOUR FACE ACTION and RANDOM CAPITALIZATION for some reason, but it does have my favorite part of any team website: player bios. I love these things because they’re always so random and ridiculous. (How else would I know that Dog Murray from Sweden owns his own company or that Ryan Getzlaf likes wake-boarding?) I’m going to start a continuing series wherein I read the bios and then decide if I like the player more or less. First up are Mike Cammalleri and Alexander Frolov. 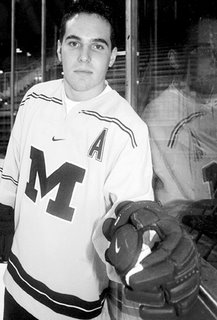 What I don’t like: His favorite book is Bringing Down the House. It could be the book about how 6 MIT graduates cheated , but I prefer to think that Mike Cammalleri really enjoys the novelization of the movie starring Queen Latifah and Steve Martin.

Overall: I like Mike Cammalleri more. He has a more intellectual side that you wouldn’t expect and he likes Scott Thornton. Everyone should like Scott Thornton. He rides bicycles! 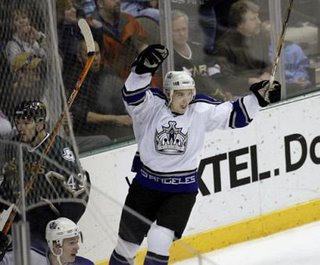 What I like: He has a dog named Quattro (after the razor?), he enjoys chess, and his favorite holiday is New Year’s. (I just like this one because I like the idea of someone asking Frolov this question and then him honestly thinking about it before giving an answer.)

Overall: I like Alexander Frolov less. He kind of comes across as a douche bag, don’t you think? I mean, he likes Steven Seagal, he enjoys Gwen Stefani, he watches Entourage… he’s not a hockey player, he’s the guy with the popped collar on every college campus in America!

The Kings play the Nashville Predators today, and I can’t think of a team that’s more universally reviled than the Predators. Seriously, the Sharks hate them, the Stars hate them, the Red Wings hate them, I hate them, hates them, their jersey designer hates them, even their potential owners seem to hate them. Now the Phoenix Coyotes can get in on the hate after Jordin Tootoo took 9,482 steps before blindsiding rookie Daniel Winnik. Craig Weller responded by unleashing a flying clothesline at Tootoo, who then proceeded to lie on the ice until everything settled down. (I am convinced that he lied there because he didn’t want to fight. I can not be dissuaded from this opinion.) Here’s the video, just in case you haven’t seen it:

There are a lot of opinions on the incident (Kelly Hrudey went nuts on TV and tried to make Tootoo walk the plank), but my favorite part of the whole thing was Tootoo’s comment after the game:

"There's always someone coming after me and there is a prime example of me not defending myself and not knowing someone was coming after me," Tootoo said. "It's unbelievable how hitting is part of the game and after a nice clean hit like that there has to be injury involved when you don't defend yourself." 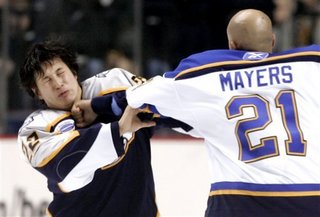 Is it hard to elbow someone with tears in your eyes?

You can almost hear the sniffling, can’t you? Hmm… someone attacking someone when they were not in a position to defend themselves, where have I seen that before? Listen fuck, nobody likes you. You have no discernable skill besides a willingness to hurt people and the only reason guys like you are still in the league is because of the instigator rule. Plus, you had this and then cheated on it. If there’s one undeniable truth in this crazy little world, it’s that blonde chicks with big fake boobs are awesome. You’re lucky that all the men in the world haven’t held you down and then taken turns kicking you in your little Tootoo Train. 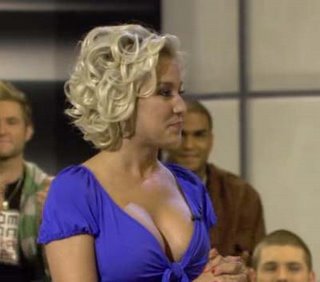 How dare you cheat on those boobs.

This is only tangentially related to the business of this blog, but since it deals with , I think it is okay: have you seen the ads by the city of ? After realizing that they have no good qualities to attract people to their miserable little town, Louisville has decided to attack the good names of much better cities. Here’s the one attacking :

Louisville, are you trying to say that you are better than ? Louisville. The one in . With the baseball bats. Ha. Hehe. Teehee…. (Deep Breath)