The Most Terrible Time of the Year

Share All sharing options for: The Most Terrible Time of the Year 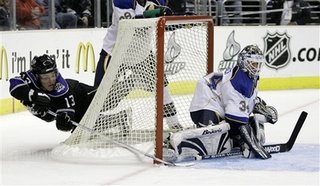 The Kings got their asses handed to them on Saturday, completely rolling over in the third period against the Blues. When your 19 year-old goalie playing in his 2nd career game gets visibly pissed at his defense, you know you’re fucked. Bernier played a pretty solid game, I thought; am I the only one who hears "Ave Maria" whenever he drops into his butterfly? I’m about 2 more good games from writing a sonnet about him, complete with iambic pentameter. 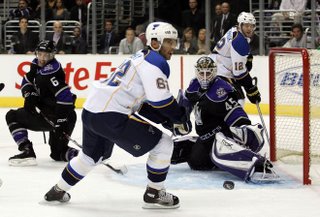 Oh, Jonathan, how do I love thee? Let me count the ways...

The whole game was a little weird. First off, what the hell were Marty McSorley and Adam Deadmarsh doing out there with Rogie Vachon and Marcel Dionne? And did they really need to make Rogie wear his glove and blocker, he looked humiliated. Kopitar was his usual amazing self, making Emmanuel Legace look retarded. (I think we're going to have to come up with a name for this weird power Kopitar has on goaltenders; I nominate "Kopitarded.") Brown scored two goals that I could have scored, but those are the ones that he needs to get if he wants to earn top-line minutes. Finally, when Kopitar schooled the Blues the first time and Brown tapped it in, my brother put his hand out for me to give him a high five but it was too close for me to cross my left hand so I tried to hit it with my right, but that was awkward and I ended up just pretty much holding his hand. That was weird too.

As I was leaving the game I heard one guy say to another, "Well, that’s what happens when you have a young team." Fuck you, random guy I’ll never see again. The young guys on the team played great. It was the old guys who gargled my balls. (Guess which movie I just watched?) Derek Armstrong was terrible on Saturday. 3 penalties, are you serious? I was this close to beating his face in with a tire iron, but then I figured no one would have noticed anyway so what was the point? (See, because he’s ugly…) Nagy and Handzus were pretty bad as well, and my God, Modry, you’re making me look like a dick for defending you a couple of weeks ago. I hate to say it, but this team looks a lot like last year’s.

This brings me to a larger point, and you don’t have to be a Kings fan to get it: the early part of the season sucks because every win makes you feel like you’re going to win the Stanley Cup and every loss makes you think you’re going to win the draft lottery. This is especially true with this Kings team, because they don’t have a ceiling or a floor. They could finish 5th or 14th and I wouldn’t be that surprised. Was the loss Saturday a fluke that I don’t have to worry about, or was it an indication that the Kings are going to be frustrating all year long? I don’t know what to think. In 10 games or so, we’ll all have a better understanding of our teams and have the benefit of hindsight to explain away early losses; ‘til then, we just have to deal with not knowing. I hate not knowing. 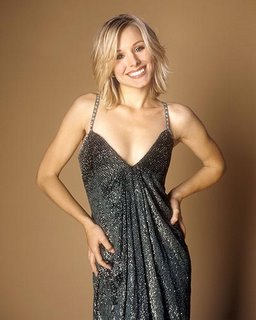 Your lips say no, but my penis says yes.

Oh, yeah, one of those things that doesn't happen in Edmonton: my brother's girlfriend was freaking out because we were in the same section as David Boreanaz and some dude from Heroes. I thought that was weird and said, "Who cares if some celebr- holyshitisthatKristenBell???" and then I spent the rest of the game staring at her to see if she was looking at me. Long story short, I totally nailed her- 4 times! Seriously, I still have the hammer.

(Update: Oh for fuck's sake, if you are going to be reporting on Jason Blake's bout with leukemia, don't make the headline, "Blake Has Cancer." I mean, c'mon!)