(I originally put this up a while ago but took it down to write about Dustin Brown's contract. I'm not doing all the math again (you do it!), so just know that Kovalchuk has scored 10 goals since I wrote this, including back-to-back hat tricks. Holy balls.)

I know, breaking news, right? I don't just mean "really good" in an All-Star way, though, I mean "really good" as in one of the greatest goal scorers in NHL history. I was watching a game the other day where Kovalchuk scored and the announcer casually mentioned that it was Kovalchuk's 205th in the NHL. I did a double-take; 205 goals, at 24? What the hell? He's added two more since then, putting him at 207 for his career. How good does that project out for his career?

(Disclaimer: This is fairly rudimentary analysis because I'm lazy and also a moron, so take it with a grain of salt.) 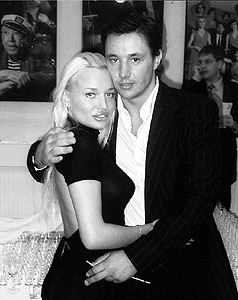 Who says Kovalchuk can't get the ugly scores?


Kovalchuk has played in 5 seasons so far. During that time span he's scored 202 goals, which averages out to 40.4 per season. Since he's 24, let's guess that he plays 14 more seasons and then retires when he's 38. At his current pace, Kovalchuk would score 566 more goals; that combined with the 202 he's already scored, would give him a total of 768, or 3rd all-time.

Now, don't go around telling everyone that I said Kovalchuk is going to score more goals than Brett Hull, because I don't want him showing up at my apartment threatening to kill me. So far in his career Kovalchuk has played in about 77 games/season, which seems unsustainable. (Although he loafs so much that I doubt he's going to get a groin pull or anything.) Also, assuming Kovalchuk is going to score 40 goals a season every year up through the long decline of his 30s is probably unrealistic. Plus, we have no idea how badly the lockout could end up costing him. 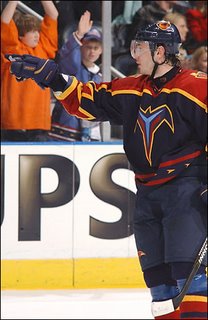 Ilya just scored twice while you read this sentence.

Still, there's a few things that make me think he could actually get to that number. Kovalchuk's career-high is 52, set in 2005-06; do you really think he's going to go another season without getting into the 50's or even 60's? That could off-set a couple down season where he only gets into the 20's in terms of goals. Plus, even without the lockout, Kovalchuk has gotten off to a fabulous start. Of the top 10 goal scorers in NHL history, only 3 have gotten off to a better start than Kovalchuk*: Steve Yzerman (229), Mario Lemieux (300), and Wayne Gretzky (429, which is just the most retarded thing I've ever seen).

So, what does this mean? I don't know, it just kinda struck me as interesting. It's weird how little press Kovalchuk gets though, especially when compared to his old compatriot, Danny Heatley. Say what you want about the rest of Kovalchuk's game, but 1/2 of the game is scoring goals; so far, he's been one of the best ever at it.


*I looked at each guy's career up to their age 24 season. A lot of the older guys took longer to get to the NHL because there were fewer teams, so they had to mature more. (Of course, those guys could play longer because they didn't really have to skate as hard.) Brendan Shanahan, Jaromir Jagr, and Joe Sakic sit at 12, 13, and 14 respectively on the all-time goal scoring list; only Jagr had a better start. I don't think anyone has gotten a better start among the younger players, although we'll see what Ovechkin has to say about it in a couple years.