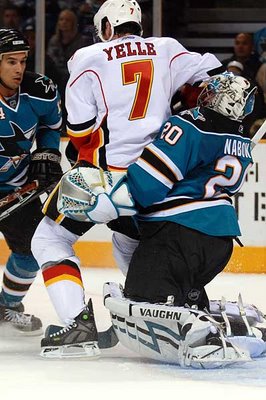 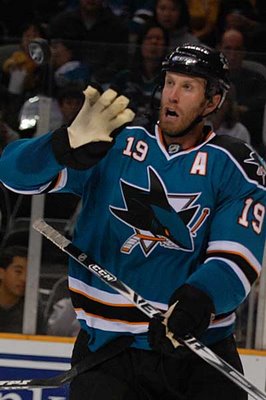 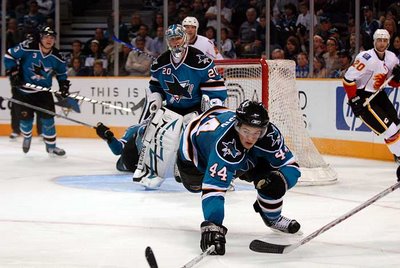 A little belated, but here are a few photos and notes from the Sharks 2-1 home win over the Calgary Flames in the preseason finale on Saturday night. The Sharks controlled the action early, and the line of Patrick Marleau, Joe Thornton and Jonathan Cheechoo is one you are going to be hearing a lot from this season. On the power play, they could move the puck at will. A couple of saves by Calgary goaltender Curtis McElhinney kept the game from getting out of hand early.

The Flames tried to control the action physically, but they were smaller, slower, and took too many ill advised penalties for that to be effective. Without Kiprusoff in net, there was little chance they were going to keep San Jose off of the scoreboard. Iginla, Tanguay and especially Marcus Nillson in the final 15 minutes were the most effective players on the ice from Calgary. The Flames have had a horrible preseason, and although that usually means very little, in this case I think it may foreshadow things to come for the season. Keenan said pregame that he usually has to get very animated at least once a month on all of the NHL teams he has coached. On this team, pencil in a few more. With Darryl Sutter in the general manager role, there could be fireworks ahead. Defenseman Dion Phaneuf was hitting players so far after the play, not to mention from behind, that towards the end of the game it kind of became a joke there was only 1 interference penalty called on him.

The Sharks made three cuts this weekend, assigning goaltender Thomas Greiss, right wing Graham Mink, and left wing Lukas Kaspar to Worcester of the AHL. Dimitri Patzold will backup Evgeni Nabokov in goal. Rookies Devin Setoguchi and Torrey Mitchell have impressed the coaching staff enough to be named to the opening night roster. The Sharks roster is at 26, but Tomas Plihal (shoulder) and defenseman Brad Norton (back) could be placed on the IR. That leaves Alexie Semenov, Rob Davison, and Douglas Murray fighting for the sixth and seventh defensive spots on the roster, with the remaining player targeted for Worcester.

More notes and photos from Saturday's game are available on Sharkspage.com here. Release the Hounds!