BoC Gameday-Ducks/Sharks: Live in the Now

Share All sharing options for: BoC Gameday-Ducks/Sharks: Live in the Now


(Surprise, Cockfags! Earl’s gone this weekend so I, Rudy Kelly, am valiantly picking up the torch and writing about the Ducks. Don’t worry, though, I'll keep my hatred to a minimum, and I’ll even refrain from making fun of Corey Perry.)

This season’s edition of The Office is hilarious. Dwight has taken his character to a new level this season and I enjoy seeing Jim struggle to grow up. Still, you can’t go on a message board or talk to an ardent fan of the show without being inundated with cries of, "The show is over the hill!" or, "They should cancel it before it gets worse!" or, "I’m a virgin!" People constantly do this; they refuse to recognize what they have because (in their minds) it’s not as good as it once was. What does this have to do with hockey? Well, since you asked, this phenomenon is right now occurring in Anaheim. 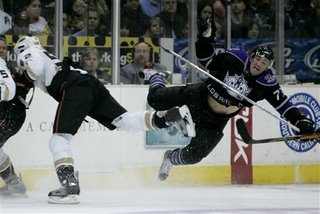 The Ducks are a good team this year. Sure, they’re having a little trouble scoring, but they still have one of the best defensemen in the game, a very reliable goaltender, three forwards in their early 20s who are all talented in different ways, the best defensive forward in the NHL, a great GM, and an excellent back-up goalte… wait, scratch that last one. But still, the Ducks should easily make the playoffs. And yet, nobody can talk about this year’s Ducks team without somehow referring to last year’s. Sure, Schneider’s good, but he’s not Niedermayer. Yeah, Bertuzzi played well before he got hurt, but Selanne scored over 40 goals last year! And Shane O’Brien… well, nobody gives a fuck about Shane O’Brien, but you get the idea. 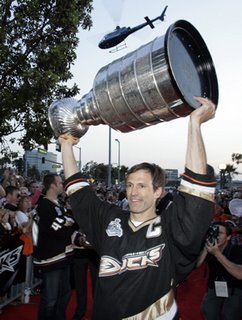 Anaheim, I don’t like you and you don’t like me, but I’m going to give you some free advice: forget about last year. The picture on the right ain't happenin' again. If Niedermayer and Selanne come back, great, but until then maybe you should be focusing on Drew Miller. I know last year was amazing and you’d give anything to go through that season again, but you can't relive the same moment twice. Even if those two old guys come back, there’s no guarantee you’ll be just the same as last year; in the salary cap era, shit changes real quick. Forget what you had and focus on the damn good team you have now.