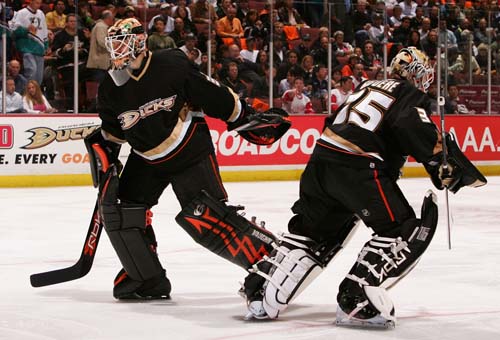 When I reflect on Ilya Bryzgalov, of course I think of the affable goofball, one who is unable to get through a single interview without me falling off my couch laughing. But there is of course another side to the guy—the capable netminder who's stepped in each of the last two playoff years to save the Ducks when Giguere was suddenly unavailable. In total, Breezy has a 9-5 playoff record in 926 minutes, with a stellar 1.68 GAA and a .937 sv%.

But let's take a look back at how he got there:

Breezy's start in this series was a complete surprise, because Giguere had just beaten Calgary in the last regular season game just four days before. Somehow, though, Giguere had suffered a hip injury and was a shocking scratch for G1, and Bryz lost his debut 2-1 nearly 10 minutes into overtime. Giguere came back for the next four starts, winning two, but clearly was not recovered—he ended the series with a 3.87 GAA and a .845 sv%. So with the team facing elimination, Bryzgalov started the last two games, allowing only one G6 goal and silencing the Red Mile in G7.

Sweeping Colorado was an incredible feat in of itself; in 25 series since moving from Quebec, the Avalanche had won at least two games in every best-of-seven they had played in. To add to that, Bryzgalov kept the high-flying Avs off the scoreboard until G3, setting the post-1930 playoff shutout streak record at 249:15, more than four regulations without a goal-allowed. It was really a huge win for the franchise, as it meant that the Ducks had toppled the typical "big three" in the west (along with Detroit and Dallas in '03), a fairly incredible triple-feat. You can see some more fun facts about that series in my second-ever BoC post.

The stats line on Breezy looks bad here, but really mostly this is a result of a crazy third period in G3. In G1 and G2 Bryzgalov limited the Oilers to 2 goals in each game, but on the other end the Ducks only managed 1 goal in each game. In the 3rd period of G3, with Anaheim trailing 1-0, things exploded on both ends. By the end of regulation the scoreboard would read EDM 5 - ANA 4, and Bryzgalov's postseason was over. Giguere came back and won a G4, but lost when the Ducks were held to one goal again in G5.

Yeah, that series was a tragedy, as the Ducks lost a lot of momentum with the long layoff after sweeping Colorado. However, I do believe I was the first person to predict Anaheim's cup championship when I wrote this drunk blog-title on 3/27/06: "I didn't say Ducks in seven; I said Ducks in '07!!!"

Another playoff year, another surprising non-start by Giguere. Here Bryzgalov re-established his clutch postseason play, outdueling Backstrom and the Wild through the first three games of the series, all one-goal wins. He got pulled for good in G4 (through no real fault of his own), and only made one relief appearance after that. Not only was Breezy crucial for advancing past the first round, but in the larger scope of things, how important was it that Giguere was able to deal with his family issues and get a fresh late start in the playoffs?

I guess my main point is that it's wrong to underestimate the contributions of Breezy; I don't know whether the Ducks would have advanced past the first round in either of the last two playoffs without him. He was the victim of a logjam behind $6 M Giguere, and as a result the Phoenix Coyotes got an absolute gift off the waiver wire (see my latest Fanhouse cartoon for a visualization of that).

It's fair to condemn Burke for not getting anything in return for the valuable netminder, but it is true that the trade market for goalies is fairly dead, and I doubt Burke is well-liked enough in the GM community to get any trade favors. So far, Jonas Hiller seems to be an adequate replacement, so I don't think it's hurting the team any, but we'll have to see what happens if Giguere pulls up lame for another playoff round.

I'm actually kind of expecting Hiller to get the start today. I have no inside information or anything, but I read Carlyle as a guy who won't push the "Giguere v. Bryzgalov" storyline just for its own sake. Besides, it's important that Hiller get a start fairly soon to show why Breezy was suddenly expendable, and a home game against Phoenix may be just the ticket. That said, I'm fairly mediocre at predicting Carlyle's moves; don't put much stock in my predictions, either.