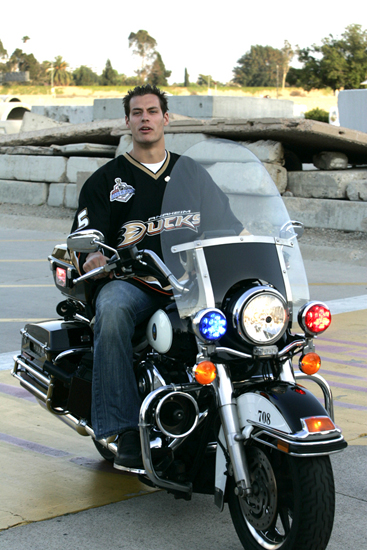 Man, there is just so much news to cover I don't know where to begin. I guess the lesson is don't take a vacation; Burke likes to break the big news just when your back is turned.

First off, let's take a look at Getzlaf's megadeal extension: 5 years averaging $5.33 M a year. Matt at BoA put together a nice table that puts it in line with a few other extension deals, and I'm more than comfortable with this dollar amount. It's not the 15 years I had been advocating earlier in the summer, but Getzlaf is really a kid you can build an offense around--good size, range, and creativity, plus a pretty wicked shot. He'll be a talent no matter what sort of tight-checking or free-flowing hockey the league develops into. He's grown up in sheltered minutes, sure, but last postseason he did lead the Ducks in scoring and in power play scoring, and he's leading the team in scoring this year as well.

We'll see what this means for Corey Perry's extension, who was 2nd in playoff scoring and is currently 2nd in team scoring, but I'm not averse to throwing big money at the kids; it's at least consistent with the marketplace. Next year should be very interesting, by the way. It'll be the year when most every contract comes to an end; the Ducks seem designed with a built-in "out strategy", which seems like a reasonable notion coming out of the lockout. Here's the list of contracts that come to an end next year: Scott Niedermayer, Mathieu Schneider, Todd Bertuzzi, Andy McDonald, Todd Marchant, Rob Niedermayer, Francois Beauchemin, Sammy Pahlsson, Travis Moen, Shane Hnidy, Kent Huskins, Brad May, George Parros, and even Randy Carlyle and Brian Burke. So far only Chris Pronger, J.S. Giguere, Ryan Getzlaf, and Chris Kunitz are signed beyond 2008-09; with Perry that seems like a pretty solid core to build around.

You can leave a comment on that, or any of this other news I'm brushing over.


Also this weekend: Ducks trade a 2009 2nd round choice to Washington for center Brian Sutherby. My inital response: who? Two things about Burke, though: he loves checking centers and hates second round picks. More to come on that I'm sure.


Also this weekend: Ilya Bryzgalov is a Coyote! I wrote a bit on that while on vacation, and I'll have more to say on that come Friday's post.


Tonight's opponent, the Dallas Stars, is the team that's benefited the most from shootouts (22-6); since the lockout they lead the league in shootout wins and winning percentage. I guess it's interesting to note that both the Ducks and Sharks have beaten the Stars in a shootout (without even using a third shooter!), though it took each teams four tries to do it.

The Stars are 12-4-2 against the Ducks since the lockout, including 2-0 this season. They've outscored the Ducks this season 8-1, with the only ANA goal coming on a 5-on-3. Still, I'm optimistic. The Ducks seem to play well when I'm unable to watch, which will be the case tonight.

Prediction: Ducks give me something to be thankful for and win it in a shootout. Regulation goals by Pahlsson and Kunitz; shootout winner by rich man Getzlaf.