Share All sharing options for: Ducks Gameday—Oh, you Oilers 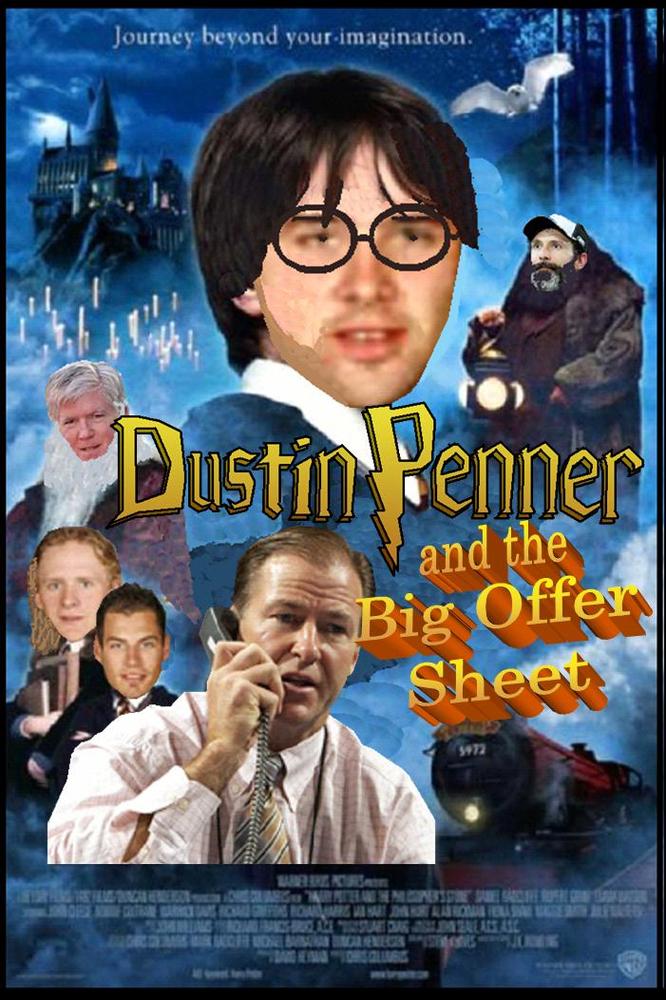 I made this poster earlier this summer, but it was a pretty flimsy concept: "Hm, doesn't the name 'Penner' look kind of like the name 'Potter'?" It's not the strongest graphic to ever make its way to this blog, but considering I got nothing else ready today, it seems more than appropriate.

Dustin Penner's counting stats thus far this season have been fairly mediocre: 25 gp, 4 g, 7 a, -1. Of course, it might not be that surprising if you took a look at his last 25 games in a Duck uniform (mostly playoffs): 25 gp, 4 g, 5 a, +3. That Anaheim stretch includes Penner going scoreless throughout the month of May, something that's likely to be repeated this year unless the Oilers get some magical boost in the standings.

It's not really that Penner's useless on the ice, but he's got to be played very carefully—he's a big-bodied passenger, one who will neither be very useful in backchecking nor will be the catalyst in the offensive end. He's incredibly strong along the boards and somewhat capable with the puck, but in terms of his overall contribution, it is pretty reliant on his linemates' ability to do most of the skating, defense, and puckhandling for him, and is best utilized against pretty soft competition. These drawbacks are pretty overlookable when the big guy plays for league minimum; however with a huge paycheck in a salary-capped league, the flaws get a lot more scrutiny (see also: Bertuzzi). 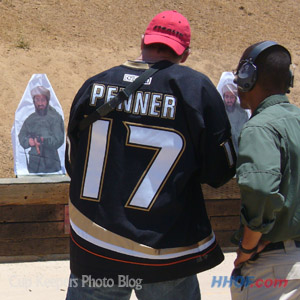 I don't really want to get too critical of Oiler management (the Oilosphere has that more than covered), but the one aspect that strikes me the most about the Penner offer sheet: if I'm a GM that has publicly admitted his team's inability to attract UFAs, I wouldn't be in the business of driving up RFA salaries at the expense of UFA salaries. Sure, with the CBA being what it is, I'm sure eventually the stigma around offer sheets would have eventually disappeared, but still, it is significant that Kevin Lowe did trigger this market shift. Probably the best thing Edmonton has going for it is a solid group of young, entry-level talent; jumping the offer-sheet gun seems only to paint a dark future for keeping it together. And heck, thanks to Lowe getting desperate in the Pronger deal and the Penner deal, even a bottom finish by the $50M-payroll, injury-plagued Oilers won't yield them anything—the Ducks hold the Oiler's 1st round pick, while Lowe will pick based on Anaheim's finish.

To be fair, nothing really should be judged on the Penner offer sheet until year three or so; the five-year contract was more a long-term gamble than a short-term one, and it's entirely possible that Hemsky and friends learn to use the big body of Penner effectively or that he improves on his weaknesses and gets much more worth his salary (he still is rather new at this league). Also, it will be better gauged after we see what Burke does with his picks—I've seen little evidence so far that Burke is a draft wizard; at least nobody he's drafted so far seems willing to make the big league roster.

Anyway, I'm getting rambly; feel free to offer your Penner-thoughts or Edmonton-reaction in the comments. Meanwhile, from the Oilblog angle (one that you have to respect--nobody's had a fall from grace like they have), Covered in Oil put together a nice Oiler-drinking game for tonight; I especially like the suggestion in the comments: "Drink every time Dustin Penner looks tired."