Share All sharing options for: Ducks Gameday—Two guys that should switch jobs

One lesson that's been reinforced the last few weeks by Anaheim's punchless power play: personnel matters. When you've got the wrong guys in the wrong situations, it's sure tough to be effective. That same lesson can also be applied off the ice, though, and in that light I offer one suggested job switch that I think could really help the NHL improve its effectiveness going forward. 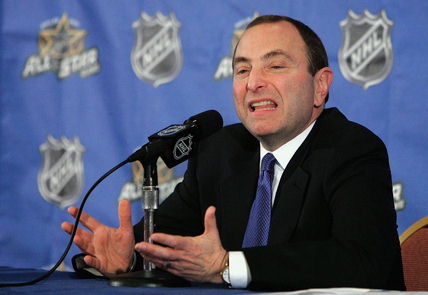 Depending on who you listen to, Gary Bettman has been either a clown or a villain during his reign as NHL Commish. Even aside from the policies the guy has had to promote (unbridled expansion, a season-long lockout, a mega-complex salary cap formula, untested rule changes, untested uniform materials, and selling a sport in the U.S. using its bull-riding network), he's also just not a very likable guy. Even when he's talking up hockey fans as being "the greatest fans in the galaxy", you can see the dollar-signs light up in his impish eyes. The guy is grabby, too; Scott Niedermayer had a heck of a time trying to extract the Stanley Cup from Bettman's slimy fingers—a cup that Gary never really earned the right to carry.

Why not consider someone who is trustworthy and charismatic with the job of Commissioner? Why not bring in some true hockey royalty—someone the fans can not only stomach but possibly even support? Someone worthy of handing the Cup to a champion, someone fans will believe has the best interest of the sport in mind. 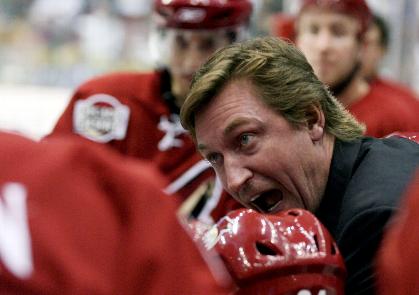 There is such a guy coaching in the desert. Perhaps hockey's greatest scoring legend, who's been an ambassador for hockey since his teenage years. But whereas the Great One has been a symbol of on-ice excellence, thus far in Phoenix his story has been one of behind-the-bench mediocrity. Under his leadership, the Coyotes (who to be fair, have not put together the strongest roster) have finished 5th in the Pacific both of the past two years, and even though this year has started more promising (having shut out both the Ducks and Stars), they still start November with less standings points than their four Pacific neighbors.

Wayne is a guy who's hockey charisma is still off the charts, and while it has served as a draw for hockey fans in Arizona, it seems that it could be better utilized on a larger leaguewide stage. He's a guy I'd trust to keep the game of hockey as a priority, thinking both for team owners and players, something I'm not easily saying about Bettman these days. Plus, as a bonus, I wouldn't cringe when Wayne's hands touch the Stanley Cup—he's at least a guy who's earned it before.

As for Bettman as a hockey coach, well, that might not work out splendidly but I'd like to see if Gary is capable of actually generating worse results than Phoenix has put up with; there's hardly anywhere to go but up. Besides, Gary's vision has really been about promoting hockey in non-traditional markets; this would help him focus even more strongly on that vision.

So, it's just a lazy Saturday theory, but one that I think could work out for everyone. Put Gary behind the Phoenix bench and Wayne in the commissioner's chair and I for one would support it. Who's with me?

Prediction: Per my television, Wayne Gretzky has 72 wins in 170 games as a head coach. Won't it be nice to give the Great One his 99th loss? Ducks offense explodes, they throw 45 shots on net and win 2-1, both goals by Pahlsson.