(My good friend and fellow meerkat enthusiast Megalodon wrote an incredibly long write-up about the Sharks heading into tomorrow night's game. I'm sure P.J. or Cheechew or Mike will come up with something tomorrow, so I figure I'll put this up today. Enjoy!) 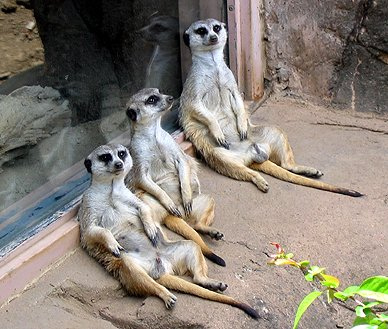 A lot is still up in the air about the Pacific Division, sure. But after this past week, we can say one thing for certain: the Sharks are way better than the Coyotes. No matter what else happens, nobody can take that away from us. The Sharks seem to have their game back now. I was pessimistic, but what turned things around for me was, strangely, the recent game against Dallas. The Sharks played great in the first period, then they decided to try sucking for a while. That didn't work very well, and Dallas came back in the third. Earlier in the season, the Sharks would have completely folded, and Dallas probably would have gotten another goal in regulation. This time, the Sharks managed to wake the hell up and win in style in the shootout. The team showed perseverance and confidence that was lacking earlier in the season. 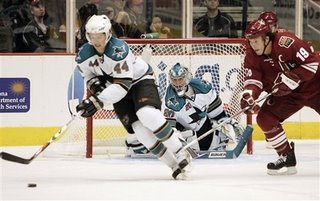 No team is going to play at their best every minute of every game (except Ottawa, your 2008 Stanley Cup Champions). Against Dallas, the Sharks finally demonstrated an ability to rebound. 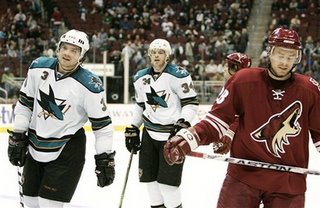 What we are finally seeing now is the team that everyone picked before the season to win the Stanley Cup. Thornton and Setoguchi are doing exactly what Thornton and Cheechoo did - but Setoguchi is a way better player, so the sky is the limit for them. Marleau came out of his coma, Roenick is surprisingly productive, and all the rest of the offensive cast is finally producing like they should. Nabokov is looking like he wants to play 83 games this season if possible. Defense, which worried me before the season, now looks like one of the top squads in the league. Rivet is always amazing, Ozolinsh has been a great spark out there, Vlasic is playing Pronger-like minutes (minus the elbows and the muggings), and Douglas Murray is my new Jesus. (Ed. note- I wanted to change his name to "Doglas," but Meg pointed out that made it sound like he didn't have a dog, and that was sad.) All of a sudden, the Sharks look great wherever you look.

Even when tragedy strikes, they manage to make it a positive. This was in the San Jose-Phoenix game summary:

" FROM THE BENCH Sharks defenseman Craig Rivet, who missed tonight's game with a leg injury, spent the entire game on the bench as a coach. Following the win, his teammates awarded him the game puck."

This definitely shows that Rivet is a great leader on the team. You don't hear a lot about him, but this kind of thing gives you a glimpse of what's going on under the surface. He's been around longer than guys like Vlasic, Carle, or his usual line-mate Murray, and it's clear they're learning a lot from him. I hope he sticks around for a long time.

The Sharks have won their past few games without Michalek. It's great that they can afford to give him time to really heal up, and when he comes back that just makes the team that much better. It's hard to know where to stick him, because the current lines are producing so well, but even on the fourth line he is always a threat.

Goc is a great kid, and his blog rules, but I don't really think he's good enough to be on the team consistently. Maybe that will change.


The Thornton line is really interesting, since Setoguchi and Cheechoo are basically the same player (they even look alike). We'll see if it stays like that.

Semenov is clearly San Jose's worst defenseman, and when Rivet comes back it should probably be Ozolinsh - Vlasic, Murray - Rivet, and McLaren - Carle. Ehrhoff will get some playing time at the expense of Murray, but the intensity and physical presence that Douglas brings is missed when he's not there. 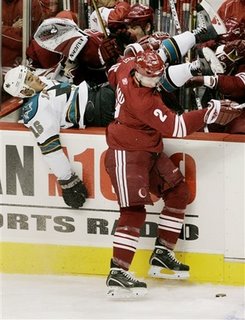 Expect this in the Ducks game, but with a punch to the groin thrown in.

The Ducks will be first or second in the Division at the end of the year. They've put together some good games recently and seem to have found what makes them win. They're playing physically and the top line is really producing. If the Sharks and the Ducks both keep it up, the battle for the Division championship will be intense.

The way I see it, the Pacific Division has three tiers. First, there are the Sharks and the Ducks, who should both be going for first place. Then you have the Kings, who are a team on the rise, and Dallas, who are definitely declining. It's likely that only one of those teams will make the playoffs at the end of the year, so it will be interesting to see who comes out ahead. The third tier is Phoenix. The third tier is also known as the "Shitty Tier."

A lot of Anaheim's skill comes from their physical play. They can push the Kings around because the Kings have a lot of skilled guys who aren't that big and then some guys like Scott Thornton and Raitis Ivanans who can play physical but who suck at hockey. The Sharks are the team you would design if you wanted to counter Anaheim - everyone is big, everyone can play physical, and you can't push anyone around. Tomorrow, I'm looking for Anaheim's top line to probably score a couple, countered by Joe and Setoguchi continuing their streak. The Sharks have the edge in secondary scoring, though, and Roenick will get a garbage goal to give San Jose the win, 3-2.

Oh yeah, and I sure hope somebody in San Jose is in charge of watching Ducks games, because that top line just keeps trying that "off-the-boards" move. It worked against the Sharks last time and it worked against LA on Thursday. Let's figure out something to do to stop that play, okay guys? And why don't we try that sometimes, too?

That is all. Go Sharks!