(Here's another shitty post from Megalodon. I don't have the heart to tell him that he sucks at writing, so try and humor him in the comments. He tries so hard!)

In the Battle of California, the Sharks are the odd team out. Aside from their obvious geographic isolation, a number of other factors set the team apart, such as:

1. Their age. The team is not the respected older sibling or the over-achieving youngster. They are the forgotten middle child, working hard and doing the best they can, doomed to always be overlooked in favor of their older or younger brethren.

2. Their town. Los Angeles has a million things going on aside from the Kings, including the Lakers, Dodgers, and of course, their awesome football team whose name escapes me. Anaheim has Disneyland and the Angels (I think - although I must admit their name confuses me a bit). San Jose has the Sharks and...uh...well...a decent public-transit system? An airport? Jeez - wikipedia, help me out here.

"San Jose is the third-largest city in California, and the tenth-largest in the United States."

Okay, that's kind of impressive. I didn't know that. Got anything else?

"It is the county seat of Santa Clara County."

"By the 1990s, San Jose's location within the booming local technology industry earned the city the nickname Capital of Silicon Valley."

That smacks of a nickname that the city gave itself, so that's no good.

Holy crap, check out what they have to say about sports:

"San Jose has had previous attempts to draw teams from Major League Baseball, the NFL and the NBA by offering stadium deals or attracting relocating sports teams. In 1991 the San Francisco Giants baseball team nearly closed the deal to play in San Jose. [citation needed] In 1997 the Golden State Warriors basketball team after playing some games in the HP Pavilion nearly moved to San Jose. [citation needed] Neighboring Santa Clara recently announced (2006) a new stadium deal will break ground and be completed by 2009, as the new home of the San Francisco 49ers football team. [citation needed] San Jose may also soon house the practice facilities for the Oakland Raiders."

Well that's just sad. Like I said, San Jose doesn't have a lot going on aside from the Sharks - unlike the cities where the Ducks and the Kings play. Again, the Sharks are the outsiders.


3. Their logo. For some reason, the Sharks are the only team that actually depicts their mascot in their logo. The Kings have a crown (which is admittedly way better than an actual king, as we will see later in this post) and the Ducks have the word Ducks (great work, guys!), but the Sharks have an actual shark.


There are many other things that I could go into that set the Sharks apart from the other two California teams, but I would like to close by examining one difference that marks the Sharks as a FAR superior organization to either the Ducks or the Kings.

What was this awful undertaking that the Kings and the Ducks shared? Be warned - the following images may cause dizziness and vomiting, and should not be viewed by anyone with eyes. 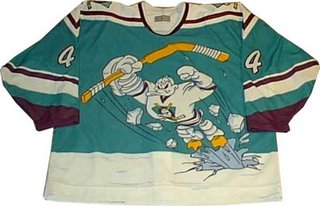 Oh god! What the hell is that thing? 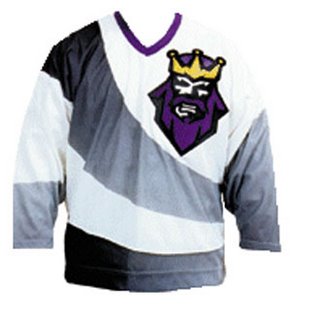 Oh no! There's another one!

There. You've seen them - you can't un-see them. I would like to submit these images as proof of San Jose's dominance of the Battle of California for all time, regardless of how any games played actually turn out.