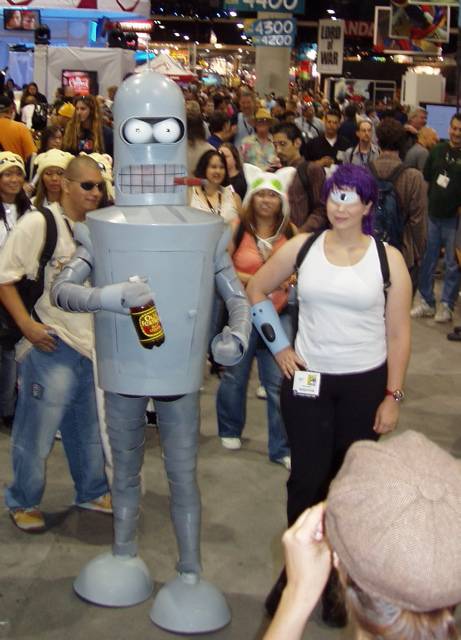 [EARL EDIT: Two of the better-dressed Kings fans on their way to Staples...]

Bender: I can’t see what’s happening, are we boned?


Wow are the Kings playing bad right now. I fortunately missed the last game, but apparently the Kings were about as spry as an aging hound dog with no teeth. Also, the dog is dead. The Kings have lost 5 in a row and have been outscored, 18-7 in the process. (Weren’t we just on a winning streak? What the hell happened?) Now, the Kings have back-to-back games against the two top teams in the Pacific Division. Oh, and Alexander Frolov is out at least a week with a groin pull.

Both Calder and Raitis Ivanans might play this weekend, but that’s kinda like leaving a hospital after finding out you’re HIV+ and then discovering a twenty on the ground; it’s like hey, cool, you have twenty bucks, but you also still have AIDS.

I don’t know what happened with the Kings. I still feel like this is just a down cycle and they’ll pick it back up soon. I mean, they played very well against Anaheim a week ago, the puck just didn’t bounce for them. On the other hand, they just got their asses handed to them by PHOENIX. Do you realize we’re tied for last in the Western Conference? That’s insane!

[EARL EDIT: If Rudy's writing doesn't melt your heart, this is all I can offer.]


I don’t know, maybe the Kings pull out a win this weekend. Maybe Kopitar picks his game back up, and maybe we get a few bounces that go our way. Maybe this can be the start of a turnaround that leads us to a playoff birth (which is only 7 points away). Maybe. But I’m not optimistic.

(Oh, what am I thankful for? I guess that the Kings have a 22 year-old rookie currently leading the AHL in points. Teddy Purcell was picked up by Lombardi last year as a free agent. Can’t remember that happening when Dave Taylor was our GM.)