Ilya Bryzgalov is a Coyote

Share All sharing options for: Ilya Bryzgalov is a Coyote 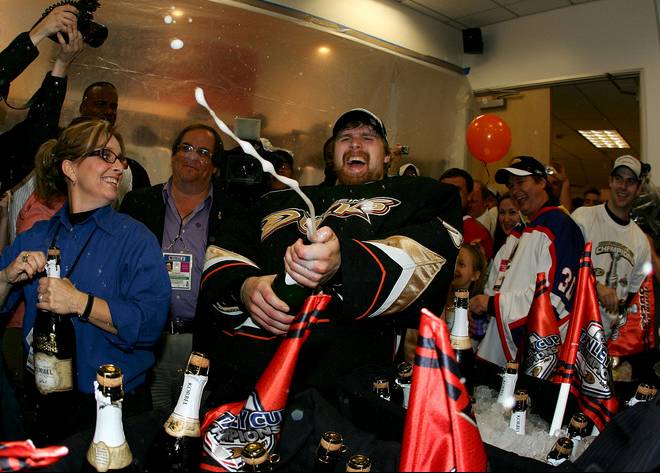 I'm going to have more on this next week, but for now there's just a few things worth saying.

I've read a lot of people that talk about how much money the Ducks are saving against the salary cap, freeing up space for the possible returns of Scott Niedermayer and/or Teemu Selanne. The problem I have with this story is that it's got to be recognized that Bryzgalov is playing for dirt-cheap this year. His salary (per NHLSCAP) is $1.36 M, with a cap hit of $1.18 M. With the season about 20% done, let's just say his cap hit for the remainder of the year is something like $900k. Meanwhile, his replacement Jonas Hiller will be paid $850k this year, but for a whopping cap hit of $3.20 M. I'd assume that whatever bonuses are in that latter number are unattainable for the Swiss goalie, but let's call the rest of the year $640k. That's a whopping savings against the cap of $260k, which doesn't buy much at all against Scott's $6.75 M contract or Teemu's TBD contract (last year he made $6 M with bonuses).

Also, it's important to note that Bryzgalov was in no way a liability to the team; he was the emergency-starter for each of the last two playoff years, and has more or less been the main goaltender for four of Anaheim's last seven playoff series (depending on how you want to define "main goaltender"). He definitely was the opening goaltender for four series, and closed out two of them. He has the longest postseason shutout streak in my lifetime (beating out J.S. Giguere's '03 number), largely built against the high-flying Avalanche. It seems absolutely amazing to me that a goaltender with the lowball salary and highball postseason success couldn't be traded in today's league, but I've had low expectations ever since the seemingly poor returns for Tomas Vokoun or Vesa Toskala last summer.

As much as it might pain rival fans to admit it, I think the departure of Bryzgalov has very little to do with Scott and Teemu, and really has more to do with Bryzgalov trying to be a #1 and Hiller being promoted to the big leagues. Apparently I am being rushed out the door right now (go Irish?), but for a really interesting take, go read Lowetide's take. I mean, right now!