Share All sharing options for: Kings Gameday: For Eff's Sake....

Will everyone please calm the fuck down? I know the Kings are on a little bit of a losing streak, but still, there’s no reason to panic. For all the gloom and doom, they’re only 7 points out of a playoff spot because the West is the weirdest thing this noble writer has ever seen. (Seriously, look at the Central and tell me there’s not some sort of voodoo going on there.) If the Kings win 4 games in a row and all of a sudden they’re back in the thick of it and everyone starts making reservations for the playoffs. Breathe, people; it’s a long season.


What bothers me more than people who overreact to the ups and downs of the season are the people who try to give a team fatal flaws like they’re in some sort of Goddamned Greek tragedy. The Kings’ fatal flaw? They’re "soft." What does that even mean? Do teams enjoy checking Lubo because he’s all cuddly? (I like to think he actually is, by the way.) This perception is only reinforced when the Kings play the rogues to the South because they led the league in fighting last year and won a Cup, so that of course was the reason they won. For the last time, and this can’t be stressed enough: FIGHTING HAD NOTHING TO DO WITH THE DUCKS’ STANLEY CUP. If I had to rank it somewhere, I’d put it right below Earl’s cartoons and right above George Parros’ moustache. The Ducks didn’t win the Cup because they fought; they won because they were good at hockey. 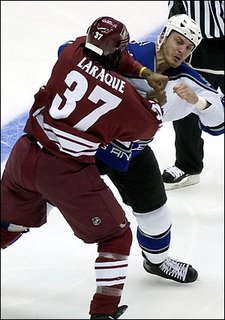 "His skin is so soft I could punch all day!"

Besides, who cares if the Kings aren't tough? I mean, it’s not like John Zeiler is getting hit and then immediately crying on the bench. I tend to think the whole emotional impact of checks and fights are overrated among fans anyway, but even if it is real, the Sharks, Red Wings, and Senators all manage to do just fine. You only really hear about teams being soft when they lose; why is that? Now, I’m not a world-renowned psychologist (I’m only renowned in the former ), but I think it’s because fans (and writers) get mad when a team loses a game and want the team to retaliate in some way. They want an indication that the team is as mad as they are, shown through a check or a fight; when that doesn’t happen, they decide the team has no "heart." It’s an easy reaction, but just because it’s easy doesn’t mean we have to go with it. The Kings are all hockey players and they’ve all bled and sweat more than we’ll ever be able to fathom to get to where they are. Now, if someone wants to deride a player’s actual ability at the sport of hockey (Jon Klemm comes to mind; seriously, Nagy wouldn’t have helped us in that game?), then I’m all for it. These little psychological profiles from afar, though, are getting really, really annoying.

Jaroslav Modry is gone for a while as he has gone back to or the Moon or wherever the fuck he’s from to see his sick dad. That okay, I guess. Jon Klemm will be taking his place, and I can pretty much guarantee that after tonight Jon Klemm will be my least favorite person on the planet. Let’s run down the checklist:

Not good at hockey? Check.

Old, and therefore unlikely to improve the team long-term? Check.

Old, and therefore a beneficiary of the ol’ "Veteran Presence" card? Check.

One of Crawford’s buddies? Check. 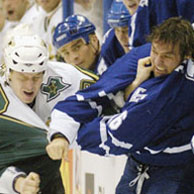 He sucks, but Goddammit he sucks with HEART.

Yeah, that should about cover it. If I were Peter Harrold, and I just got passed over by Jon Klemm to go to the NHL, I’d be pretty pissed right now.

The Kings play the Sharks again this month up in , where they’ve already won 2 games this season. The Sharks are well-versed in this whole "this team is soft" mantra, which always seemed ridiculous to me because they’re usually one of the biggest teams in the NHL. Why is it that making a run at someone when there head is down makes you tough, but being able to hold off a defender while also making a beautiful pass does not? I will bet 10,000 Sleek bucks that if the Sharks win the Stanley Cup this year credit will go not to Joe Thornton or Patrick Marleau or Milan Michalek or Evgeni Nabokov, but to Craig Rivet and Doug "Don’t Call Me Doug" Murray. When that happens, my head will explode.

Prediction: Kings lose, 2-3. They will be up 2-1, but then the Jon Klemm effect will take hold. That’s how he rolls, baby: shittily.