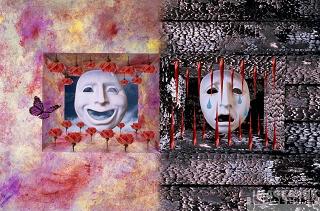 If hockey players could be mental conditions, Alex Frolov would be manic depression. (Quick rundown: Joe Thornton is agoraphobia, while Darcy Tucker would be penis envy.) He’ll go from being the worst player on the ice (unless he’s playing with Derek Armstrong) to being the best, seemingly within days or even minutes. Kings fans were gnashing their teeth at his play early in the season (when he was overcoming a groin injury), but now they’re feverishly trying to get a write-in campaign for the All-Star game on his behalf. It’s still early in the season, but could this be the year that Frolov finally figures it out? Yes, I think so. 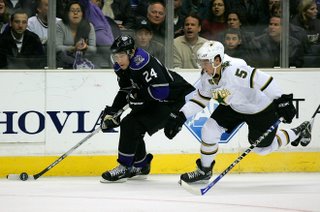 So, what really has changed about Frolov’s game this year that makes me think that? Well, he’s creating scoring opportunities, not finishing them. He has 4 goals and 15 assists on the season, a ratio way out of whack with his almost 1:1 ratio last year. I don’t have a magical answer to solve this little puzzle, but if I had to guess I’d say this was because he’s not playing on a line with Mike Cammalleri anymore. Frolov has to do a lot of the playmaking this year for his line (which has included Derek Armstrong, Ladislav Nagy, Kyle Calder, Matt Moulson, Brian Willsie, Michal Handzus, and Patrick O’Sullivan), so that means that he’s probably not going to be in the position to score as many goals. Instead, he's carrying the puck in and dishing it off.

I'd say this speaks well of Frolov's chances to keep his point production up. I don't have any concrete evidence of this, but I think it's fair to say that guys who are primarily goal scorers are more inconsistent than guys who get assists. Why? I assume it's because goals are a lot harder to create on your own, while you get another guy to work with (ha!) when you dish the puck off. This made more sense in my head, but you get what I'm saying.

I’ve been rooting for Frolov since his first year back in 2002. He’s a very gifted player who can completely take over a game when he’s on the ice. Even when Cammy passed him up in terms of production last year, I still would have picked Frolov if I could only keep one. It’s nice seeing Frolov up at the top of the King’s stat totals; the key is seeing if he can stay there. 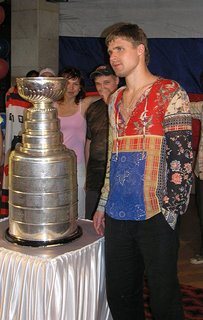 That dude in the background is totally laughing at his shirt.

The Coyotes picked up Ilya Bryzgalov today; no word on if his helmet will be covered in famous coyotes or not. ("I like this coyote, is wily.") He would have been nice to have on the Kings, but Phoenix really needed a goalie and were higher on the waiver wire, so they snared him. I was worried that Ilya is in net tonight against the Kings, but then I remembered they were still the Coyotes. (This is going to bite me in the ass, I know it.)

Prediction: Kings win, 4-3. Goals by whoever Frolov is playing with, plus one by Kopitar.