Share All sharing options for: Kings Gameday: On Line Changes

Los Angeles Kings (8-10-1, 4th in Pacific) @ Dallas Stars (8-7-4, 3rd in Pacific)
5:30 PST, Fox Sports West
Kings Record in November: 2-3-1
Marc Crawford is a lunatic. We’re all used to it by now. He’s constantly tinkering with his lines, moving Frolov up then down, putting Handzus on the 2nd line and then the 4th, throwing out lines like Nagy-Kopitar-Willsie (that’s 3 guys from 3 different lines, mind you), and treating poor Patty O’Sullivan like it’s the 1840s. ("Want to be on the 2nd line? No Irish allowed! Back to the 4th line with you!") I finally said, "Eff this," during the 2nd Ducks game, when Crawford was desperately trying to get the upper hand on Randy Carlyle and I swear Carlyle was pulling his lines off right after the whistle just to fuck with Crawford. I’m not certain, but I’m pretty sure there was one point where the Ducks went to the bench and then just skated back out. (Note: This didn’t actually happen, but you believed it , didn’t you?) 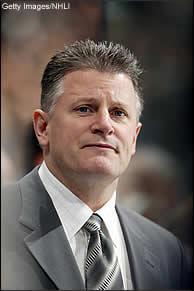 That's the same look I have on my face when I watch the Kings.

This mania has been exacerbated by the injuries to Kyle Calder and Raitis Ivanans; both guys were pretty much set in their lines (Calder on the 3rd, Ivanans on the 4th), but their loss has given Crawford free reign to throw everyone around. Also contributing to the problem has been Crawford’s phobia of Nagy. Nagy is getting 10:03 minutes of even strength ice time per game, below Matt Moulson, Michal Handzus, Derek Armstrong, Brian Willsie. This seems weird to me, because it doesn’t seem like Nagy has been playing poorly at all.

Still, through all this, I haven’t said too much. I figure, Marc Crawford is an NHL head coach and I’m sure he has a reason for everything he does that is probably above my hockey knowledge. It seems weird to me, but nothing more.

Then he split up our top line in the last game.

No offense to you, Marc, but how fucking stupid do you have to be? That’s retarded. That's dumb. If this was the Old Testament, Yahweh would cover your house in locusts for such stupidity. Thor would strike you down for such an offense against the gods. Vishnu himself would do something Hindu-y in retaliation. Your excuse was bullshit, too:

"We're looking and saying Fro is playing so well right now, we put Cammy and Fro together and opponents will have to decide do we shut down Cammy and Fro or try to play our top people against Kopitar. That's the notion. Yesterday, we didn't get enough from anybody.''


Oh, really? I thought the whole point of "Alexander Frolov & Incompetents" was that Frolov would provide secondary scoring by himself while our top line was studly as fuck; now that Frolov is doing what he’s supposed to, your response is to change it so Kopitar is on his own? That’s the dumbest thing I’ve ever read, and I’ve read my writing. Do you not understand that you're left with the same situation that you had before, but with Frolov and Kopitar now switched? Seriously, what the hell? 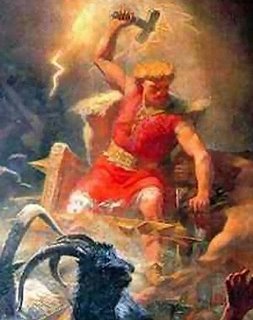 You don't even want to know what that goat is going to do.

You know who the Kings need as a coach? They need a more even-keel guy, maybe someone who puts video into his pre-game rituals. You know, a guy who wears golf shirts, and who knows how to get teams into the playoffs, and who’s about to be fired for no other reason than he’s been with the same team for a while and there needs to be change. You know anyone like that?

Prediction: Kings win, 3-2. Goals by the dynamic Kopitar-Cloutier-Santa line, which will be broken up by the middle of the 2nd.