Now that’s the Rob Blake I’ve wanted to see for the past two seasons. (Kudos to the good researchers over at The Institute of Skate Tectonics for the video. You’re doing God’s work.) Those hits of his don’t get the headlines like Tootoo’s flying elbows or Darcy Tucker’s fists of fury (why is not okay to get your elbow up but it’s perfectly fine to throw your fists at the guy?), but I’d imagine a Rob Blake hip check hurts more than any of those. It’s like… have you ever run into the side of a table? You know how it hits that nerve that runs right down the center of your leg and it hurts like hell? Okay, now imagine that you’re going 20 MPH into that table… and the table is going 15 MPH towards you… and the table is 225 lbs.... and instead of a table, it’s an ass made of steel. Ouch. And, contrary to the insane ramblings of Brian Hayward, that hit wasn't directed at Corey Perry's legs. WHAT IS WRONG WITH YOU???

The fact that this hit took out Corey Perry was icing on the cake. I despise Corey Perry. Say what you want about Chris Pronger or Brady May, but at least they'll stand and fight like men. They don't wait for an opponent to take off their helmet and then attack them, or try to talk shit to a rookie because he's happy he got a hat trick. My brother's currently working on his dissertation about this miserable human being so maybe I can get him to expound on this, but all I will say is that I'd rather see this hit than have a birthday. 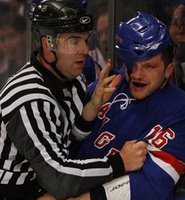 Were people expecting him to be sensitive about the whole thing?

For allegedly triggering a pre-game altercation with the Toronto Maple Leafs by making fun of Jason Blake’s leukemia. I was ready for Sean Avery to be dumped in a pit of acid after Georges Laraque claimed Sean Avery called him a "monkey" during a game (I still believe he said that), but I have to admit, making fun of someone’s leukemia is pretty… smart. Avery is a pest. His job is to get people off their game. I can’t imagine Jason Blake was too willing to play in a hockey game because he was too busy imagining ways he can kill Avery and make it look like an accident. And I mean, c’mon, people, it’s a highly treatable form of Leukemia, it’s not like Jason Blake is going to die or anything. I feel like a Larry David episode, where someone has cancer but I don’t think it’s that big a deal. Shit, I just compared myself to Larry David, that cant’ be good.

Also, does it make me a bad person for wondering what Avery said? Since he’s an idiot, he probably just said, "You have cancer!" like Blake didn’t know or something, but I like to think he got creative with it.

"I’m going to score faster than the rapid proliferation of your immature blood cells!"

"You’re going to need chemotherapy when I’m done with you… oh, wait."

"Hey, Blake, at least now you have an excuse for looking like that!" 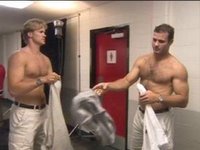 "There are a hundred and ninety ways to be a bastard, and he knew every one of them."

I thought Chris Pronger only knew 189, but I guess I was wrong. When I saw Pronger beating poor Michal Handzus about the face, I was furious but also took comfort in knowing that Pronger was going to be suspended for the next game. He got an instigation penalty and that’s the rule, right? Wrong. The NHL makes exceptions in cases when the score is close and the player in question is someone who should be out there; Pronger, being the best defenseman on the Ducks, easily fits that bill. Now, I know it sounds crazy, but I personally think Pronger knew this rule and figured he wouldn’t get suspended. Pronger’s no idiot. He may be a rake, a vagabond, a fucknut, a rapscallion, an asshole, a thief, a son of a bitch, a moon face, a ninny, a fuckwad, a bastard, an idiot, a tomfool, a simpleton, a fuckhead, a son of a bitch, a moron, an ass, a fuck, a schmuck, a dweeb, a jackass, a fucker, and an all-round piece of shit, but he’s not an idiot. I will believe until the day I die that Pronger knew he could fight Handzus and get him kicked out without suffering any consequences whatsoever, since he would never shoot in a shoot out. It’s kind of genius, in the same way Lex Luthor or the guy who invented AIDS are geniuses.

Prediction: Chris Pronger leaves the game in tears when Sean Avery brings up the death of his grandmother. Rob Blake hip checks two pucks in and the Kings win, 2-0. Oh, and either Dustin Brown or Jack Johnson bring down the hand of God on one of the Ducks' skill players.