No team-building curling tournament for San Jose this time - the team is using their second extended break of the season for something a little bit more useful: practice. 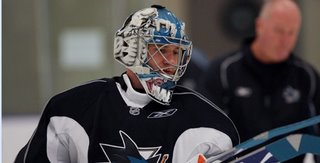 I know, I know, it sounds crazy. Practicing hockey? But why?

Because they need it, that's why. The team put together a few impressive victories, but it was clear in the game against Anaheim that this is not a team that can win a seven-game series against the western conference powers. They kept it close against the Ducks by virtue of great goaltending and some lucky breaks (Ozonlinsh, you magnificent bastard!), but the Sharks spent way too much of the game trapped in their own zone. You have to imagine that the team that comes out of the west is going to have to beat either Anaheim or Detroit, and right now the Sharks just don't seem to have the power to do that. 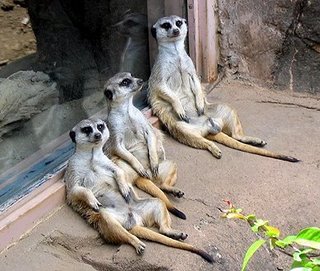 I know I already put this, but Meg came up with a better caption: "Meerly Chillin'."


So, it's practice time! As reported on the team's website, the Sharks engaged in an extended skirmish where the veterans faced off against the younger players. They had everything from four-on-four hockey to a final shootout (finally! A shootout the Sharks can win!). The veterans obviously had the proven talent, with Thornton, Marleau, and Nabokov in goal. It was the younger players that won the day, however, with Michalek leading the way in front of Thomas Greiss in net and superstar Douglas Murray patrolling the blueline.

A few short-takes from the long break...

-Kyle (where did the yellow visor go?) McLaren remarked that Greiss was "good in the shootout, just like he was in training camp." Does that mean we can expect a crazy goalie-swap just prior to the shootout some time in the future, straight out of Mighty Ducks II (I think)? Probably not. But still, if it's true, the option is on the table as long as Greiss stays with the team.

-Shaved Ice has an interesting post discussing a quote by GM Doug Wilson. Wilson told the local paper "we're certainly not satisfied with where we're at" regarding the team's chances for success at the end of the year.

-Michalek is expected to return in the Sharks' next game against the Kings. In other Milan news, the victory celebration following the skirmish led to this quote: "I love the guys and I love their hugs." I'll just let that one speak for itself.