Share All sharing options for: Memories: Hey, who's this new kid Oates?

I have been issued a challenge—at first generically by Legends of Hockey, then more directly by the Forechecker—to write a memory-post about a retired NHL player. Forechecker wrote about fond memories of Vladinator's reign of terror; I'll remember a guy who I only got to see towards the end of his career. 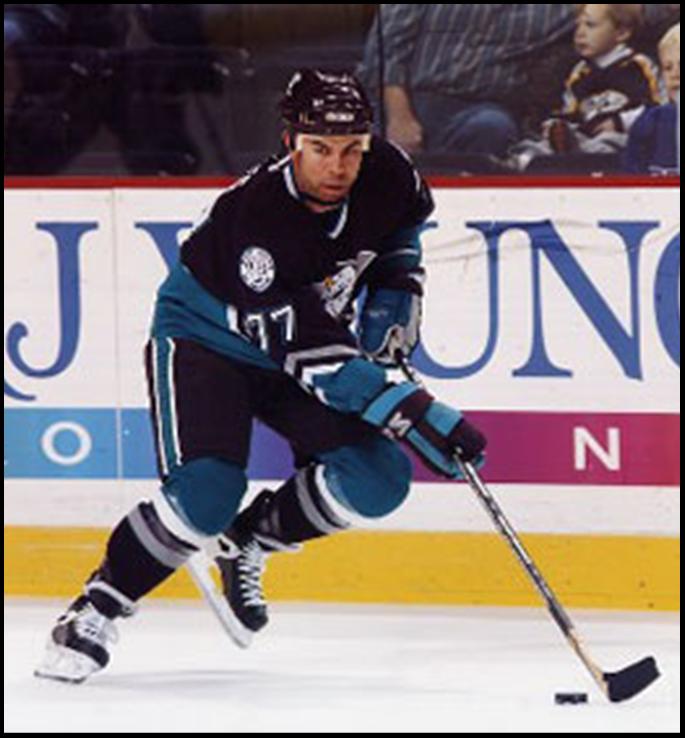 The Mighty Ducks signed Adam Oates in the summer of 2002, and I had some mixed feelings. I liked that the team was working on filling its top line (along with Paul Kariya the acquisition of Petr Sykora), and a passing center made sense, but I also was worried—could a 40-year old seriously keep up with the two speedsters?

It turns out I needn't have worried—there was a few things I wasn't considering:

a) Oates was smart. Very smart.

Of course I mean hockey-smart. You know, the anticipation that avoids hits, secures position, and comes away with the puck. As far as I'm concerned, Oates was off-the-charts. He wasn't the strongest guy, and certainly not the quickest, but he was pretty much all the time the cagiest. It was really something to watch—"Old Man Oates" (as I frequently called him) knew where to get the puck and where to send it; his linemates were quick enough that footspeed didn't really become a factor.

b) Oates wasn't playing the same game the rest of the league was.

Take a look at the blade of his stick. It doesn't get wider near the toe; it instead sort of comes to a point. We'd often joke about how poor Oates was—his blade had been worn to the nub and he couldn't afford a new one. But really, it was essential to Oates' game—he wasn't interested in gaining any advantage on his shot. Most of his goals were essentially passed into the net. His edge was in puck control and passing; the backhand saucer passes that make scorers drool.

At least when he needed to be, he was surprisingly quick. I'd catch a guy racing out of the corner of my eye and say, "Hey, who's that new kid?" And damn. It'd be Old Man Oates, hustling like a training camp rookie. My favorite example was in R1 G4 of the 2003 playoffs. The Mighty Ducks had nearly done the impossible—winning the first three games against the defending champ Red Wings—but there was plenty of nervousness still. Detroit had the kind of roster (and I'm probably stealing somebody's clever quote) that not only could have won four straight games, but was capable of winning the next 16 straight.

Anyway, late in the first period of that game, desperation Detroit pulls ahead 1-0, but then opportunity! Petr Sykora gets clipped with a high stick and falls in true Sykorian fashion, so the ref raises his arm and puts the whistle in his mouth as Mathieu Dandenault lazily skates to touch up the puck. All of a sudden, in charges Old Man Oates. In one quick move, he manages to lift Dandenault's stick to steal the puck as he charges into the offensive zone. Only two other players continue playing (the rest anticipate the whistle)--Curtis Joseph, alone in his net, and Paul Kariya, streaking down the near wing. Oates draws the goalie and throws a pass to Kariya, who buries it, tying the game. Anaheim would end up winning the game 3-2 in overtime, completing a sweep consisting of four one-goal victories. I bet Dandenault still wonders how he got overtaken by a 40-year-old speedster.

There are two real tragedies in the Adam Oates story—one, that the Mighty Ducks lost in the SCF and Oates never got to win a Cup. But also, there seems to be a phase out in today's NHL of Oates' legacy—the pure set-up guy. Sure there are fantastic passers in the league, but everybody's still trying to be a shooter. Oates showed that there was a role and a career for a pure passer, one that didn't have to be a shot threat, and I miss that a bit. In any case, I'm glad I got the chance to watch a one-of-a-kind player like Adam Oates. Even towards the end of his career, he was well worth watching.

Rudy, Cheechew, you guys are tagged. Any memories about former NHLers you want to share?