The Problem with the San Jose Sharks

Share All sharing options for: The Problem with the San Jose Sharks

The Shark's inability to win in the playoffs is one of the more hilarious storylines in the NHL recently, and I think I've figured out the cause: they're all nerds. Without Scott Parker, there's not one single Shark that is a legitimate hockey player stereotype. (Well, Jeremy Roenick, but he's all the bad ones.) Let's go through the worst offenders:

Joe Thornton: Joe Thornton has been the face of the team ever since he was acquired in 2005, which is appropriate because he seems like a huge goober. I'm not saying I wouldn't want to hang out with him (I totally would), it's just that he's a rube. I've seen him in 3 commercials so far: he's eating in 2 of them (the one where he keeps fucking up toast preparation is hilarious) and he's asking another man if his butt looks big in the other. Obviously, he's no Mark Messier. Well, he's probably the Mark Messier that cries all the time, but not the one that guarantees wins and then scores a hat trick and then has sex with your mother and all you can do is applaud his form. What was I talking about? Oh yeah, Joe Thornton has an unhealthy body image. 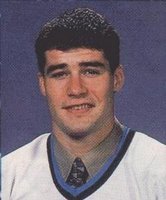 Patrick Marleau: I don't think Patrick Marleau knows how to talk. If someone told me he carried around a trumpet like the protagonist of The Trumpet of the Swan I wouldn't be surprised. Look at him, he looks like he's about to fall over at any moment. Plus, I have it on good authority that he once went to with two other Sharks when he was 25. I can't think of a single good reason for an adult male to go to a water park that doesn't end with an arrest for child abuse.

Ron Wilson: Ron Wilson wore a golf shirt the day before the Sharks played in a must-win game in last year's playoffs. That may not be bad, but it sure as hell isn't good. 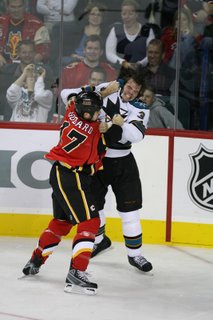 Dog Murray (from Sweden): Dog Murray is awesome, but this interview kind of makes him look like a Mary. Seriously, who wants to go by ? "Doug" is a pretty solid hockey name; " is a 35 year-old 3rd grade teacher who still takes his laundry home to his mother. I don’t care if it sounds like "Dog" when they say it back in Sweden, my grandfather didn't lose his arm fighting those sons of bitches in the Crimean War so that they could mangle the English language. I swear, some of y'all people just ain't got no gadnum sense.

Hello my name is Marcel would you like to play SOCOM?

Marcel Goc: The fact that he's named after a mime is bad enough, but Goc's real crime is his blog over at sjsharks.com. Don't get me wrong, I absolutely adore it, but if you read between the lines you realize that he's definitely a loser. For example (read these with a German accent for added hilarity):

My roommate is Christian Ehrhoff and he's an O.K. roommate. Really, he's great. He's quiet like me and we both like to read books and watch movies.

Today Mike Grier and I finished the USA Today crossword puzzle, so we were pretty excited. I do most of the writing and he figures out most of the words.

We Usually play PSP on the flights…. SOCOM is the game we play…. Wes Howard, our assistant trainer, isn't very good either because he just hides in the game.

(About the earthquake) I called my family and let them know we were o.k., but they hadn’t heard about it yet. My dad told me over there around 1970, they had an earthquake and he looked out a window to see a tower swaying.

We had Tuesday off because of the trip, but I didn’t do much. I got to my house about 3 a.m. after we flew in from and got up at 9:30 a.m. I came to the rink for a little bit, but just went home.

As Meg pointed out, that last one is kind of devastating if you think about it. Can't you imagine him sitting around at home, nothing to do, and then going to the rink and just kind of wandering around, looking for someone to talk to, then sighing and going home and sitting on his couch some more? Poor little guy. Still, nerd.

So there, that's the problem with the Sharks: they're nerds! I guess when you consider the region the Sharks play in, it all makes sense. San Jose is overrun with nerds, so what better way to attract them to your game than by featuring dorks?

*This picture is why I could not be an NHL GM, because I would absolutely refuse to draft someone who looked like that. He looks like he just told his doubles partner a delightful zinger about his butler's inability to make a proper martini. "And I said, 'Jeeves, if I invested as well as you made a drink, I'd be penniless!'"