Pronger gives advice in the form of an autograph

Share All sharing options for: Pronger gives advice in the form of an autograph

So the game last night was really a lot of fun, but being the drunkard that I am, I only ended up taking one photo (I'm fairly new to the concept that there's a camera on my phone). I took a shot of the back of an autographed Pronger jersey I saw in the concourse that cracked me up. 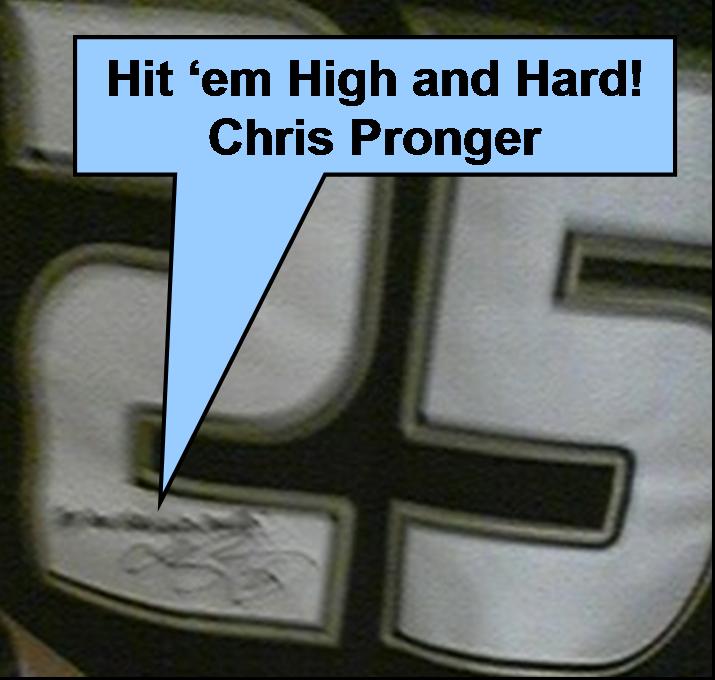 (Also hilarious was my pal who was behind me. "Did you just take a shot of that guy's ass?")

I'm not a guy who collects autographs, but in my dream scenario I'd like to get a long-sleeve shirt signed by Pronger. I'd have him sign each of the elbows, making one out to Tomas and the other to Dean. The shirt would say "Oilers 4 Ever" on it and it would hang proudly in my hall of irony. I doubt he'd actually sign the thing, but the look on his face before he clobbered me would be priceless.

Oh, and as for the game? Well, we didn't get to see Roenick's 500th goal (I kept urging his teammates to pass to him, even when he was on the bench), but we did get to see Torrey Mitchell's first. At first when the Sharks fished the puck out of the net (I swear I meant no pun there) I thought they were going to bogusly award the goal to JR, like they tried with Mike Modano a week ago, but congrats to the kid anyway.

The Ducks at that point fell into their crippling routine of allowing a one-goal deficit to be fatal; they refused to get a shot on goal (or really exit their zone) for the rest of the first. The later two periods they seemed more in control, and finally they found a less competent opponent in the shootout. That was the 28th shootout in Anaheim's history (9-19), and marked the first time ever that they'd won two in a row. It was San Jose's 14th shootout (3-11); they've never won consecutive shootouts.

I understand griping at shootout suckage. Lost shootouts certainly represent standings points left on the table. But imagine if the Ducks and Sharks were average teams, winning half their shootouts. That would mean an additional 5 standings points for Anaheim and 4 more for San Jose--over the course of more than two seasons. It just doesn't seem like a lot to fuss over, though certainly it could be improved on by both teams.

Hey, if even for a day, the Ducks are on top of the Pacific. Not bad for a team that over its last five home games has had a lead for less than 8 minutes.