The San Jose Sharks Have the Worst Fans in Hockey

Share All sharing options for: The San Jose Sharks Have the Worst Fans in Hockey 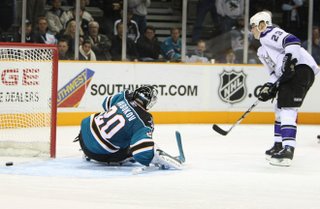 Couldn't they just give San Jose the loss and save everyone some time?

Right? Remember when they were winning at home all the time and everyone was saying how great their fans were? I do. I couldn’t go 5 feet without listening to some San Joseer bragging about how great they were and how San Jose fans are more cultured and understood how to support their team better than the fans in Los Angeles and Anaheim. Now that they have fewest wins at home in the NHL (along with 3 losses to the Kings there this season), that means that their fans suck now, right? I mean, it’s not like you can take credit when your team wins and then blame them when they lose, right? That would be crazy and illogical.* Tough break, San Jose.

How badass is Jason Labarbera? Lost in the Kings’ woes the past two weeks has been the stellar play of… Labs? Labby? This guy needs a good nickname. I prefer "Nolte," after his profile shot, but that’s just me. I mean, the guy’s sporting stats like 2.49 GAA and a .917 SV%, and it’s not because of the Kings’ defensive play or anything like that. The craziest thing is that he’s posting those stats and still has a sub-.500 record. If I told you at the beginning of the season that the Kings would get good goaltending and still lose, what would you have said? Well, you probably would have called me gay, because you’re a dick. Fuck you man, I don’t even know why I hang out with you sometimes. 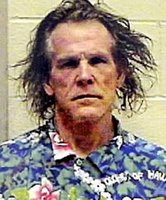 Nice game Jas- oh, I'm sorry sir, I thought you were someone else.

What do you guys think of Michal Handzus? I think he’s kinda getting dicked over. Sure, he hasn’t played great so far (although I think he’s picked up his game of late), but I saw that the guys on Versus said he was the biggest free-agent bust of the year so far. The guy is coming off major knee surgery and hadn’t played in a year! There are two injuries I accept in hockey: injuries to your knee and your head. I can’t even imagine how difficult it would be to walk confidently after wrecking your knee, let alone skate. I know he’s getting paid $4 million this year and that’s probably too much, but I’ll give him this year to get back into shape. If he’s leading team in penalty minutes this time next year then I’ll be first in line to flagellate the son of a bitch. (No, FLAGELLATE. Look it up and get your mind out of the gutter.)

I don’t really have any hard evidence to back this up or anything, but I’m convinced that Milan Michalek did vile things to Jack Johnson’s mother some time in the past. That’s the only way to explain Jack’s actions every time we play the Sharks. He tried to kill Michalek two weeks ago by jumping at his head, and last night he gave Michalek the mother of all face washings because Michalek… stood there? It’s nice to see Jack play with a little bit of an edge, but why is it only against Milan?

*My craaazy friend Megalodon thinks the Sharks aren’t playing well at home because they’re young and nervous to play in front of the home crowd. Sure why not.