Share All sharing options for: Sandis Ozolinsh makes his debut in 5-2 loss to Los Angeles at home 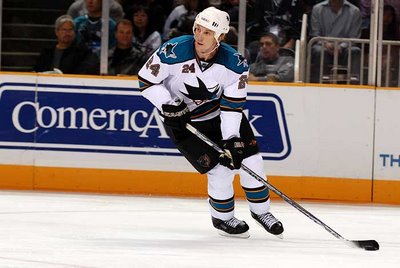 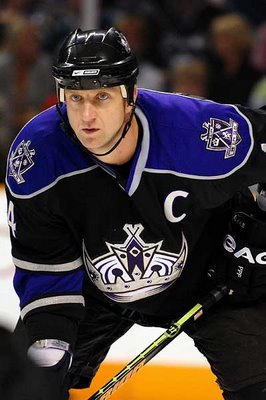 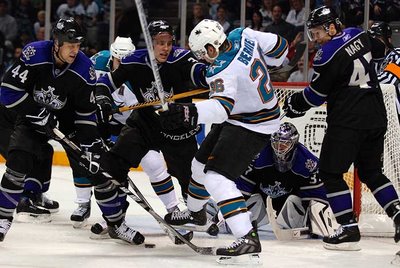 Sandis Ozolinsh kicked off his return engagement with the Sharks last night against Battle of California rival Los Angeles. Ozolinsh logged 20:17 minutes of ice time, behind only Rivet (22:07) and Vlasic (21:10) on the San Jose blueline, and finished without earning a point or registering a shot on goal. There were a few lost edges and scrambling to get back into position in the first period, but after 20 minutes Sandis started to move the puck up ice with authority.

"I felt good. In the first, I got caught on a long shift and got out of rhythm. If felt good physically. It took me until the second period. That's when the shackles came off and I got going. The second half of the game, I felt a lot more comfortable." Ozolinsh told reporters after the game.

Patrick Marleau put the Sharks on the board in the first period, and the Sharks outshot Los Angeles 21-10. The opening minute of the second was more of the same. The Sharks pressured Jean-Sebastien Aubin, swarming in front of the crease. After Michael Cammalleri's goal at 1:43, assisted by Tom Preissing and Alexander Frolov, the wheels came off the San Jose attack. Every time they tried to build momentum, a Los Angeles player would make a play with the puck, or a mistake would lead to an odd man rush in the opposite direction. The Kings capitalized on their chances, the Sharks did not.

In the post-game media interview, Ron Wilson described his team as "fragile", and it is an idenity they are going to have to work themselves out of because right now it fits. Patrick Marleau mentioned a month of division-heavy games, and said that the Sharks could not afford to give any away even at this early point in the season.

The Sharks finished 0-5 on the power play, with several tremendous point blank saves by Jean-Sebastien Aubin. Aubin (2-1-0, .906SV%, 3.28GAA) finished with 45 saves on 47 shots, earning his second win of the season. Evgeni Nabokov (6-6-1, .899SV%, 2.46GAA, 1SO) also made several clutch saves in the first period, but the Sharks could not build on his stellar performance and the mistakes were costly. Nabokov finished with 25 saves on 29 shots.

Lukas Kaspar finished his second NHL game -1, with 12:46 minutes of ice time, but he was one of the bright spots down the stretch for San Jose. He has explosive speed, and he began to use his size more effectively than he has earlier in his career. Bernier also split the defense late in the game, and lifted a puck over the crossbar with one hand while holding off a defenseman with the other. Lubomir Visnovsky, as always, was a rock for the Los Angeles blueline. Kings left wing Matt Moulson out of Cornell University, scored a highlight reel goal in his first NHL game.

"Remember when Los Angeles had bad goaltending?" Earl Sleek offered via a text message after the game. LaBarbera is solid, he just needed to survive the initial "burn him at the stake" period from impatient Kings fans, and he has already reeled off 4 straight wins. Lubo, Preissing, Stuart and even Blake may be able to offset some of the mistakes Jack "JMFJ" Johnson is going to make early, but his talent is undeniable. Jean-Sebastien Aubin over Mathieu Garon might not be a call I would have made, but that is why they get paid the big dollars. Don't look now, but the Los Angeles Kings are in first place in the Pacific Division.