Save Sandis Ozolinsh, save the world

Share All sharing options for: Save Sandis Ozolinsh, save the world 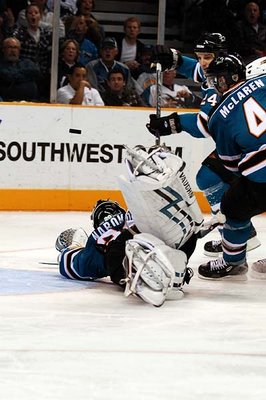 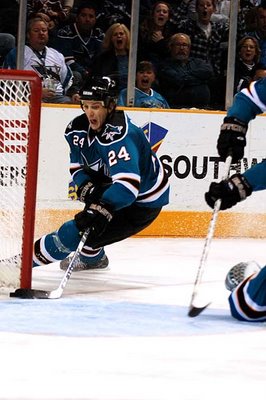 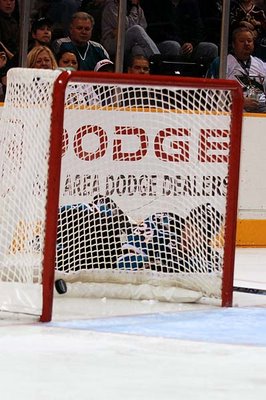 Normally after a 2-1 shootout loss to the Ducks you would have to point to the exceptional play of Sharks defenseman Douglas Murray or Anaheim forward Sammy Pahlsson, big game performances by goaltenders Evgeni Nabokov or Jean-Sebastien Giguere, or the shootout goal by public enemy #1 Corey Perry, but without a doubt the highlight of the game came on the above goalline sequence from Sandis Ozolinsh.

With the game tied at 1-1 in the third, Ozolinsh sees that the trajectory and the momentum of the puck will carry it over the line. He makes a diving stab with the blade of his stick with about an inch to spare. The puck barely trickled wide right of the far post. The Sharks pressure Anaheim for the remainder of the third period, and a scoreless OT preceeds a shootout loss to the Ducks. Without this play, the Sharks would have had a monumental task evening up the score given how tight Anaheim was playing in its own zone.

Losing to Anaheim is about as painful as listening to slam poetry on ESPN Sportscenter, but salvaging a point in the standings could play a factor in the final days of the Pacific Division playoff race. More notes and photos from the game will be posted here shortly.

Above photos are a little blurry because I took a photo of kids with a Pronger sign seconds before this play. Every time Pronger touched the puck, the crowd joined together to boo as loud as possible. A couple of times when a player fainted a pass to Pronger, the crowd boo'd prematurely. With the retirement of Theo Fluery, with Ed Belfour plying his trade in Sweden, Chris Pronger may be the most hated opponent ever to play at HP Pavilion. The displeasure has traveled with Pronger as he moved from St Louis, to Edmonton, to Anaheim, but after the game Sharks fans lined up 3 deep to ask him for an autograph on his way off of the ice. In San Jose, the Sharks are marketing games with the Anaheim Ducks and the Los Angeles Kings as California Cup games.