So the league isn't scoring enough, says the Buffalo News. Teams are adjusting to the new rules and the resulting style of play is as stifling as ever. Goal-scoring has continued its decrease (mostly because of declining power plays), and a lot of hockey gets played rather eventlessly. And as the article notes, it's not just the raw goal count that's troubling; it's the general style of play that has resulted. I participated in a blogger roundtable discussion on this at Fanhouse, but I thought I'd talk through some ideas a little more in this post.

Bigger nets (as has been suggested several times) might be an answer that generates more raw goals, sure, but it's important to think about what the aftereffects might be. Are coaches going to pull back even more tightly because now there's more shot areas that need closer coverage? Will the preferred scoring play be a shot from the point with more bodies to bounce off in front, and a phase-out of odd-man rushes? Will the end result be any more entertaining, more creative, or more watchable?

It's like the two-line pass. Sure the concept seems sexy—every once in a while you do get to see a cool long-bomb pass that leads to a great scoring chance. But what you might not notice as glaringly is the inherent cost of these occasional moments. For sixty minutes now both teams are defending against the long-bomb pass; a defender can't support his team's rush for fear of the cherry-picker. It's a steady cost to weigh against an infrequent benefit. It would have been nice to have observed this rule change's effect on scoring on its own, but unfortunately we have been stuck with a slew of simultaneous untested changes so it's impossible to isolate what effect the two-line pass has on scoring.

If there's one common theme to all these rule changes, it's that they seem designed to make it more difficult to defend. The thinking being that if it is more difficult to hold a one-goal lead, teams should change their behavior. What has not been addressed, though, is the motivation of an NHL coach. A coach gets fired if he does not win, pure and simple; there is no incentive to score more than is necessary to secure a winning record. It's not that goals are valueless, but when given a one-goal lead, the more pressing urgency is to prevent a tying goal. If rules are created that hamper defending a lead, then a coach will find an even more conservative approach to adapt to that. More skaters will hang back, more pucks will be chipped, more bluelines will be held, more minutes will tick off the clock.

The league needs to stop trying to "trick" teams into more offense and instead work on its motivations. Here's a crazy idea. What would happen if postseason seeding was determined by goals-scored? Or better yet, what would happen if the playoffs were reserved for the top-16 scoring* teams in the league?
* Must have more goals for than goals allowed. Gotta keep goalies in the net. 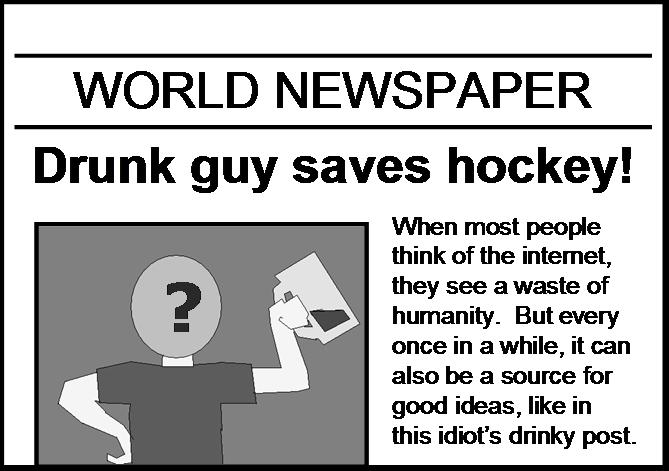 The solution’s probably too radical for sure—there’s dozens of drawbacks I’m not really bringing up, but the game theorist in me says the best way to increase scoring and to increase scoring chances isn’t about handcuffing teams’ ability to defend—they will always find a way to adapt, usually by behaving even more defensively. Instead it’s to actually reward scoring. The league needs more gamble, not more net. The ice is plenty big enough, the players are plenty skilled enough, and the internet is YouTube-prepared enough. Make it in the coach’s interest to generate goals as well as wins, and I think you’d see some exciting results.

And with exciting results, the sky’s really the limit, isn’t it? Hockey could be on ESPN. The Preds could stay in Nashville, and Las Vegas and Hamilton could get teams as well. The owners and players could become bazillionnaire friends, and a dumbass guy like me could quit my day job and get paid to sit around and draw hockey cartoons.