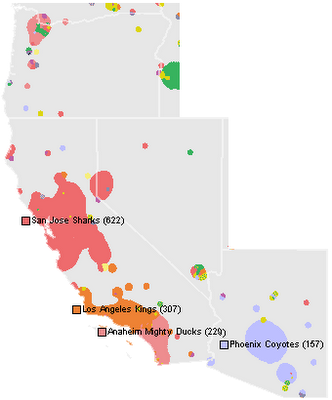 Commoncensus.org is an open source mapping project using user input to generate interactive maps on a local, regional and national level. The reliability of the data hinges on the amount of participation from the public, but there are a few interesting "sphere of influence" trends that can be examined as the project builds a userbase.

With 622 entries from San Jose fans, 307 from Los Angeles, 229 from Anaheim, and 157 from Phoenix, it is possible to draw an early map of fan support for different NHL teams in the Southwest. The Sharks have large blobs of support in the SF Bay Area, Lake Tahoe, and northern Oregon regions. Allegiences are a little mixed between the Anaheim Ducks and Los Angeles Kings in southern California, Phoenix holds sway over Arizona, Las Vegas appears to be conflicted.