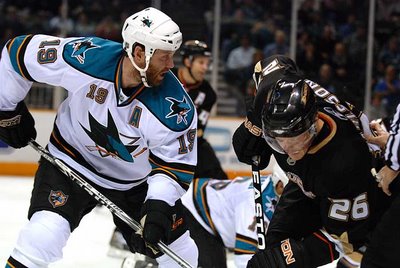 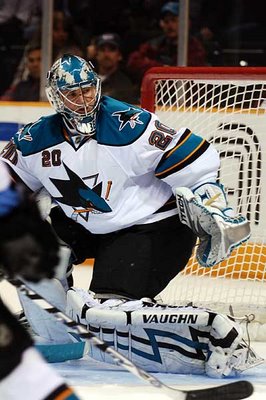 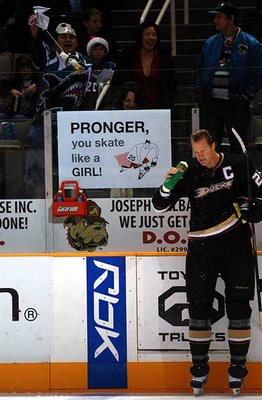 Here are a few photos from Anaheim's 2-0 win over the Sharks on Tuesday. NHL.com's recap of San Jose's 2-1 OT shootout win at Anaheim is available here.

The Sharks held a 2-hour team meeting Friday instead of its usual practice at Sharks Ice. The meeting was in part a result of poor play against Phoenix and Anaheim, in part a reaction to post-practice comments Jeremy Roenick made to Mercury News columnist Mark Purdy, as detailed in this article: These are games that matter for Sharks.

Jeremy Roenick knows exactly what must be done. And he's not afraid to say it. This is why Sharks General Manager Doug Wilson brought Roenick's veteran voice to the team. After missing five games while resting his achy knees, Roenick returned to the lineup Thursday and scored a power-play goal. But while watching those five games from the press box, he made some telling observations, which he shared after practice one day this week.

"When this team gets in trouble," Roenick said, "we wait for somebody else to do the job; instead of taking initiative to do what you can do to help, we're waiting for somebody else to do it. . . . With the exception of maybe a couple guys, we have no grit in terms of our meanness to want to compete. And when we do that, we're an easy team to play against."...

"Guys are doing their own thing, not supporting one another," Roenick said. "When you don't work away from the puck and help the guy you're playing with, you're just putting him in a bad situation. We get caught standing around, looking, more lackadaisical instead of stepping up the pace. . . . It comes down to how much you really want it. Are you here just to make the paycheck and pass the time away, or did you come here to win?"...

"I think we have to come to the realization that you're not letting yourself down, you're letting 20 other guys down by not competing," Roenick said. "A lot of people are looking to you for bringing that leadership, and when it's not brought, it's easy for the other guy to say, 'Well, he didn't do it so why should I?' And that's a disease."


I have to write up the Stockton Thunder v Bakersfield Condors game I attended last night, Bakersfield earned a 6-4 win on the road. Yutaka Fukufuji was in goal for Bakersfield and former University of Denver goaltender Glenn Fisher was in net for Stockton. 2005 NHL Entry Draft first round selection Ryan O'Marra also plays for the Stockton Thunder. Bakersfield dropped 4 unanswered goals on Stockton in the third period to squash their come-from-behind attempt. After that I will post a few quotes from Roenick after San Jose's 3-2 OT loss to Phoenix.

Earl can caption the photos above, or add your own in the comments. Note the duck hanging from a rope in the third photo. Nicely done.

[Correction] Center Ryan O'Marra was the NY Islanders first round selection in 2005, 15th overall. O'Marra, Robert Nilsson and a 2007 1st round pick were dealt to Edmonton for Ryan Smyth on February 27, 2007. O'Marra was named yesterday to the National Conference roster for the 2008 ECHL Allstar game which will be held in Stockton January 23rd. Stockton Thunder rookie left wing Jacob Micflikier and captain Brad Farynuk also were named to the Allstar roster.