Ducks Gameday—Behindthenet does BoC a solid

Share All sharing options for: Ducks Gameday—Behindthenet does BoC a solid

I'm not going to write too much about tonight's matchup; you know where to go to read up on that. Instead, I'm going to praise Gabe Desjardins at Behind the Net for his always-solid work aggregating and crunching through NHL data to really help promote the notion of data-driven hockey analysis. In the past, I've talked up his strength-of-opposition and strength-of-teammates metrics; they really help to put a context around a player's 5-on-5 production (for example). This season, he's added lots of other interesting stats; you could spend a solid day looking through the metrics on his site.

One thing that really caught my eye over at BTN's blog, though, was tracking shots and goals from where they are taken on the ice. This is a pretty fascinating new layer of data, and while its accuracy or its usefulness is still being explored, I think it's pretty darn cool that the data is being collected. It may not mean much just yet, but I think it's day is coming.

As an example, I asked Gabe in the comments of his blog whether it would be possible for him to run some shot and goal charts for the BoC teams, specifically on their 4-on-5 penalty kills. Why the PK? Well, just for starters we've observed this year how the Sharks are killing penalties with ease, whereas the Ducks and Kings have struggled in that area. Perhaps by looking at the shot charts side-by-side maybe some aspect might become apparent--some difference in how the different PK units are allowing shots, and which shots are becoming goals.

All this data is pre-Christmas, 4-on-5 only, and just for illustrative purposes. 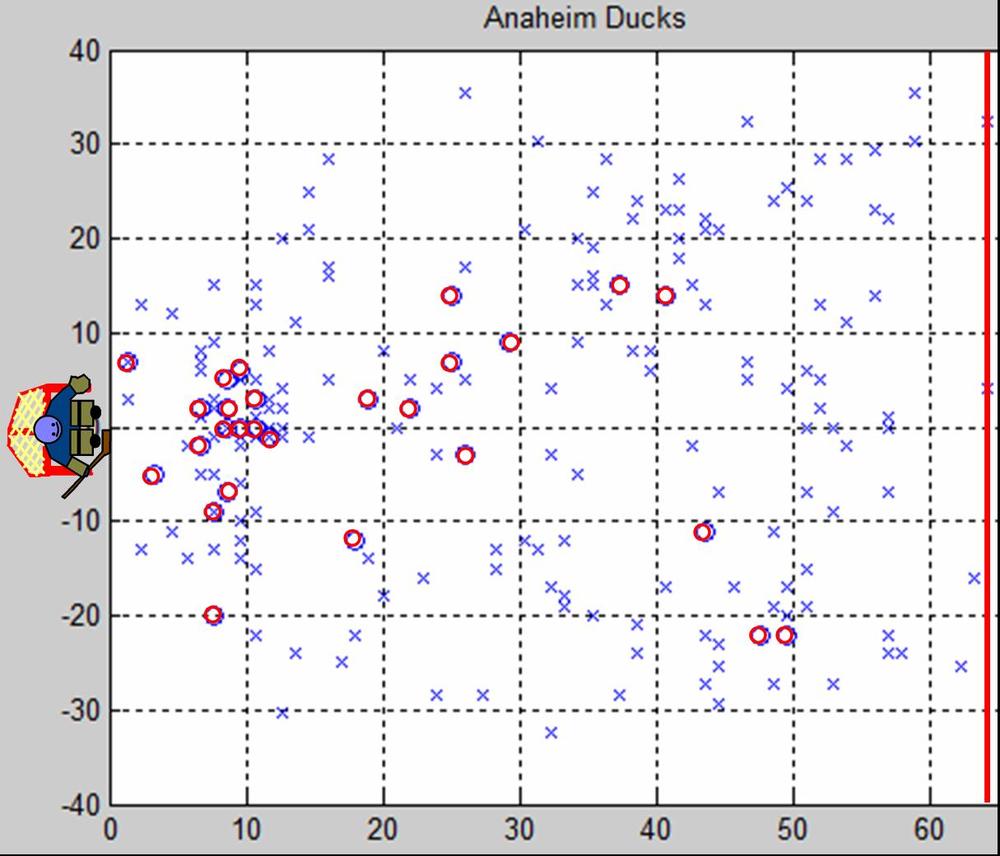 A lot of what's emerged is fairly intuitive; there seems to be a lot of activity and a lot of goals that cluster right around the goalie. These may be one-timers or rebound shots, but it seems that power play units are working to generate shots from that "danger zone", and the better they seem to generate those shots, the likelier it will be that the PP unit will find success. Also somewhat interesting are shots from distance--they seem to be taken with a lot of frequency, but rarely do they seem to beat the goaltender. Still, you have to say that the point shot does have an effective use; overall, teams still score against Duck penalty-killers with good effectiveness. 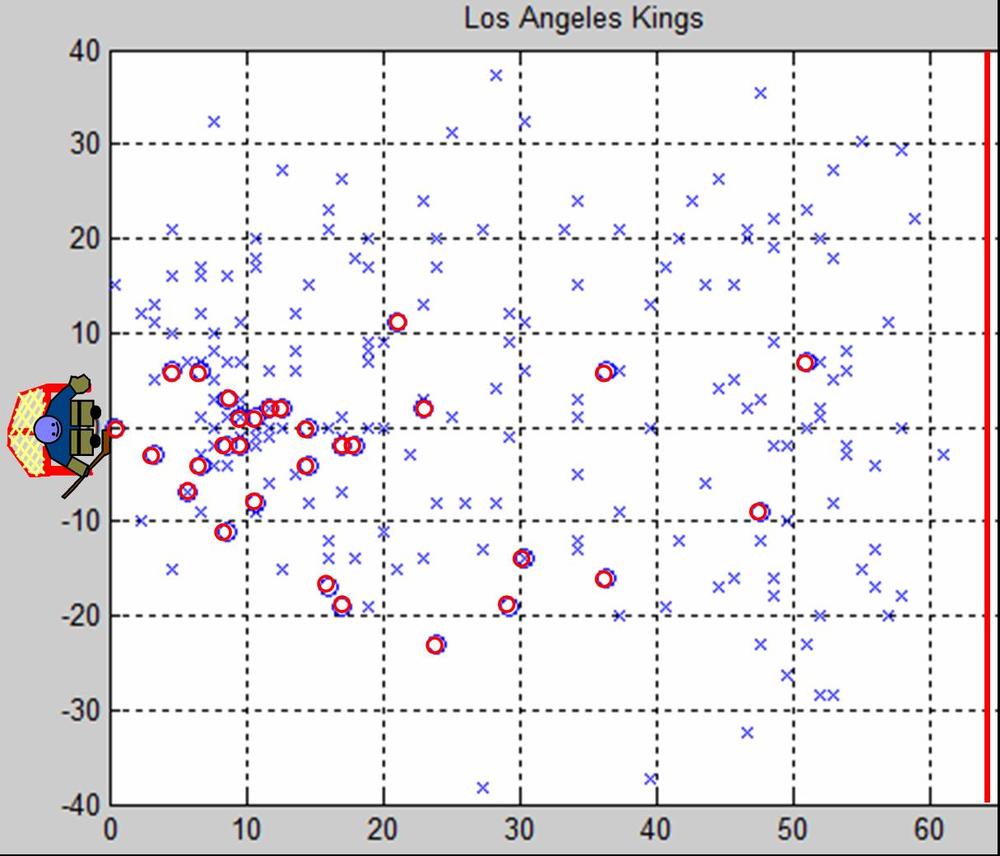 Here's the same chart for the L.A. Kings this season, another squad that's struggled to keep the puck out of their net when shorthanded. A lot of the same observations apply, although note how much more vulnerable the Kings' "danger zone" leakage appears to be. That seems like a thing for that unit to maybe focus on defending.

Also a bit strange seems to be bleeding from one side of the ice; it looks as if a lot more goals are being scored on the Kings from the goalie's right side than from the goalie's left, even though the shot counts seem kind of equivalent from both sides. I think this is a question maybe for observant Kings fans. Is this a function of having dangerous PP options playing on one side, or maybe is it a flag that there is a weak defender on one side? Perhaps this is a goalie issue that could be explored, who knows? I'm not really sure what the proper response for a team that notices these trends, but it is worth noting where trouble patterns emerge; addressing them might be the key to improving PK performance. 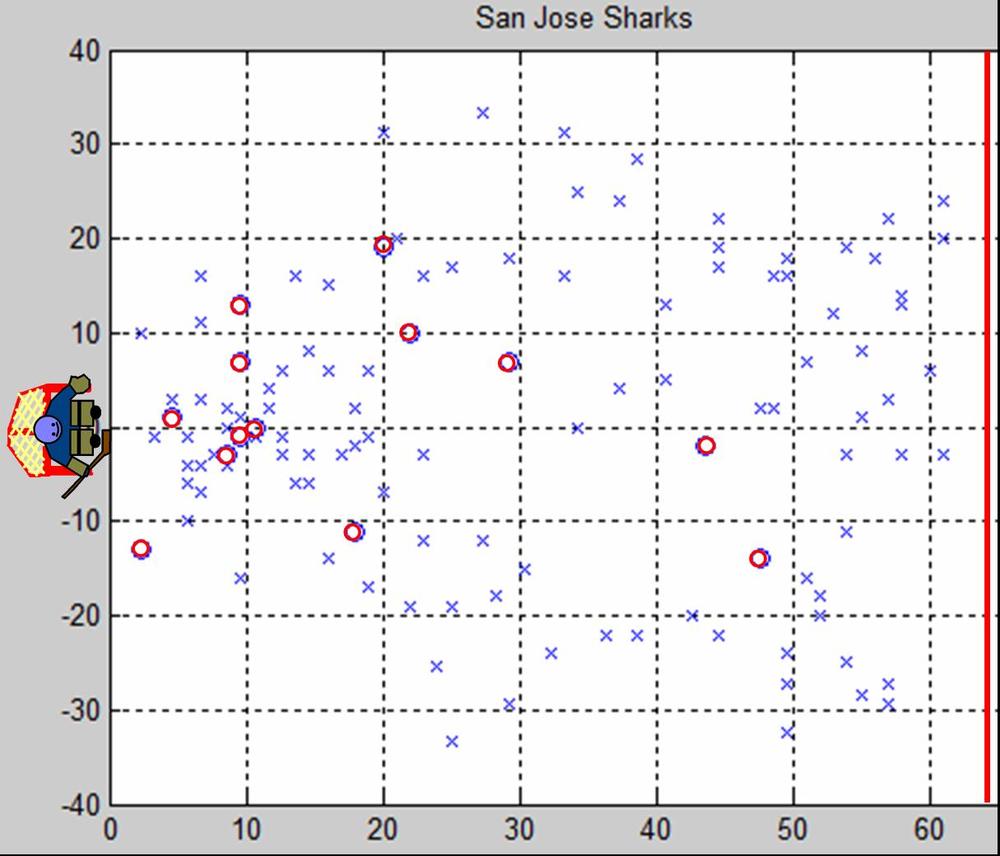 And for contrast, here are the results for a successful penalty kill, courtesy of the Sharks. A large difference seems to come from shot prevention; this chart isn't nearly as dense as the Ducks' or Kings' were. Also, it seems that the Sharks are much more adept at defending the so-called "danger zone"; there's a cluster of activity, but it seems much more controlled and limited. There seems to be a lot more ability to prevent point shots from getting through; this probably contributes a great deal to SJ's success.

At any rate, I don't want to put out any super-strong statements about what the data means or indicates; we're still in a bit of an exploratory phase (certainly feel free to leave your own observations in the comments). Mainly, the thing to take away here is that the data is being collected and even at this stage can be examined in different manpower situations. The consistency of the data may be a bit suspect at this point, but for sure that will improve, as will analysts' ability to incorporate these coordinates into aggregated findings. For today, these charts are interesting and a bit revealing, but probably not very "actionable". Looking to the future, though, I can see where these sorts of charts will become fundamental for coaching analysis. We are probably on the brink of a new age in hockey understanding, and I'm glad there's guys out there like Gabe that can put it in a form that idiots like me can toy with.

Prediction: Crap. No Pahlsson tonight, or for any of this road trip. I won't be able to watch this game tonight; I'll be at my mom's birthday dinner. Still, somehow the Ducks claw their first victory from the Oil tonight in their last meeting of the season, 4-2. Goals by Bertuzzi, Weight, Pahlsson, Getzlaf, and Beauchemin.