Share All sharing options for: Ducks Gameday—Better know your Sabres 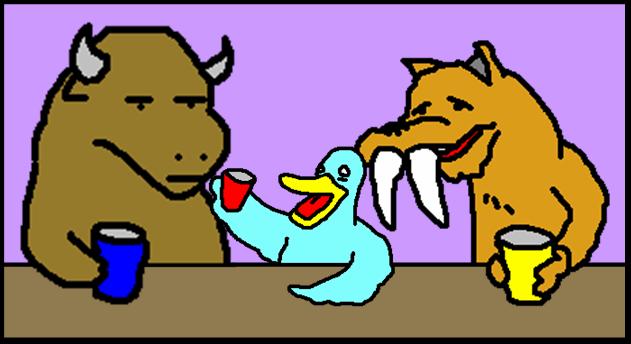 Boy, talk about staging a game one year too late. Last year at this point, the Sabres and Ducks combined for a 39-5-8 record; this year both teams seem much more bent towards short-term nostalgia.

As is usually the case, though, fans of each franchise probably suffer from own-conference myopia; it's only natural that fans concentrate their attention on their team's direct opponents in the standings. What happens in the other conference is some other team's problem. Last year, before the cup finals, I ran a nice feature with Ben from Sens Army where we answered each other's questions about the comming opponent (Ben's questions / my questions); this year I got contacted to do a similar exercise by D.O. from the Sabres blog Die by the Blade.

So, without further ado, here are five questions I asked D.O. about the Sabres this year. You'll note that in the fifth question, I'm sort of an asshole.

1. The obvious starter: now that the season's past the quarter-pole, time to reflect--who's more missed, Danny Briere or Chris Drury? Salary notwithstanding, who would fit in on today's Sabre roster better?

The easy answer would be Danny Briere, he had 95 points last season and he already has 30 this year. The correct answer, however, is Chris Drury. Drury was the heart and soul of this team last year and it has been obvious that he has been missed both on and off the ice. The effect that Chris Drury had on this team ranged beyond goals and assists and was measured in wins and losses.

2. I've read some pieces in passing suggesting that the loss of Teppo Numminen is really having a strong effect on the team--his importance maybe is more evident in his absence than things you'd notice during the game. How much is the Repo Man missed on the ice and in the lockerroom? Who's making up for that?

Teppo was the clear choice to be the captain of this team so that should give you an idea of how much he is missed. In the absence of Drury and Briere the Sabres made it a point to get Teppo signed but unfortunately his heart condition re-emerged and he has been shelved all season. It was evident early in the season how much he was missed on the ice when the Sabres were struggling mightily on defense. Brian Campbell has emerged as true leader on this team and has actually been named the captain for the month of December. Jaroslav Spacek has recommitted himself and it has been very evident to see in his stats (6G-9A-15P in 16 games played). The Sabres have also got good play out of young guys like Andrej Sekera and Mike Weber.

3. A year ago after 24 games, the Sabres were 19-3-2, outscoring opponents 101 - 70. A year ago after 28 games, the Ducks were 20-2-6, outscoring opponents 98 - 64. It strongly suggests that there is a large lesson about trying to replace top-line talent with 2nd-line talent, and the pain that comes from doing so. Everyone sees a higher level of competition. Is that pretty much what we're seeing with the Sabres, or do you have other theories?

The Sabres lost only two players in the offseason (Drury and Briere); beyond that this is pretty much the same team. Tim Connolly was immediately inserted into Danny Briere's old spot (remember that Connolly only played the final two games of last season). I think the biggest difference between this season and last season is a change in philosophy. Lindy Ruff continuously talked about being more defensively reponsible without changing their style. I don't think the players really understood what he meant and quite frankly I have no idea what he is talking about either. It appears that the team gets it now because they have won six of their last seven including a 8-1 victory over the Carolina Hurricanes on Saturday.

4. On this year's team, who has been a surprising standout? Who has delivered on their salary? And who is the goat? Answer as often as you like.

Unfortunately there are more goats than guys playing well but we'll start out on the positive side. Jaro Spacek has been incredible this season after struggling through last season. Spacek had five goals and 16 assists in 65 games last year and he already has six goals and nine assists this year. Daniel Paille has also been a pleasant surprise as a third and fourth line player. He has five goals, six assists and a plus seven rating to lead the team.

The list of goats is numerous...I guess it has to start with Thomas Vanek because of his huge salary. He has played a little better as of late but he has seven goals and 10 assists which is well below his totals for last year. It appears that Vanek is trying to hard to live up to his contract, I believe the phrase is "he's gripping the stick" too much. Maxim Afinogenov has been nonexistent this season, except when he's going to the penalty box. Afinogenov is one of the Sabres' most talented offensive players and he has been awful.

5. OK, let's go back in the time machine. What if the Sabres advanced past the Senators in the playoffs and were up against the Ducks in the Cup Finals? Who'd win the make-believe series, and who'd win the Conn Smythe? Bear in mind that the series would start in Buffalo, not Anaheim.

It pains me to go back to last season but since you ask...the Sabres would not have been able to compete with the Ducks. The Sabres were physically manhandled by the Ottawa Senators in the Conference Finals and that was the reason for them being eliminated. In watching the Stanley Cup I saw the Ducks do the same thing to Ottawa. The Ducks were a really talented and more importantly a physical team while the Sabres relied on speed and skill to win games. The Sabres may have been able to squeak out one game but the Ducks were a team of destiny last year and they were not going to be stopped.

I'm a little bit surprised by D.O.'s last answer, to tell the truth. It seems to me that the Sabres were unlike any other opponent that the Ducks beat last spring, in that they weren't nearly as top-heavy in terms of their production. Minnesota had a Gaborik-Demitra line that needed to be stopped, Vancouver had a Sedin-Sedin line, Detroit had its Zetterberg-Datsyuk, and Ottawa had its Alfredsson-Spezza-Heatley trio. In all those cases, stopping those specific lines usually meant beating the opposing team, but I didn't think the same sort of approach could be as effective on last year's Sabres squad. I really don't know how that hypothetical series would have played out myself, but I'm sure that the Sabres' multi-line offense would have been tougher for the Ducks to defend--at the very least it wouldn't make sense to team up Pronger and Niedermayer against that sort of team.

At any rate, you can go check out my answers to D.O.'s questions. You'll note that there are some common themes between these two disappointing teams, mostly along the lines of failing to replace top-line production and the trickle-down effect it has on team success.

Prediction: Well, maybe D.O. has given me some confidence on this "Battle of the Cream of Last Year's Crop"; let's say Ducks 4, Sabres 1. Goals by May, Perry, Pahlsson, and Drew Miller with a rare brother-on-brother goal.