First off, make sure to check out Rudy's gameday post below (stupid NHL, always scheduling BoC games on the same day!). Meanwhile, our good friend and loyal commenter spade-in-victorhell sent me a link to this picture yesterday, with the suggestion that I use it in today's gameday post:

I was researching stuff for as avalanche cartoon and came across this....made me laugh...theres a funny caption that needs to go to this....Cant think of a good one. 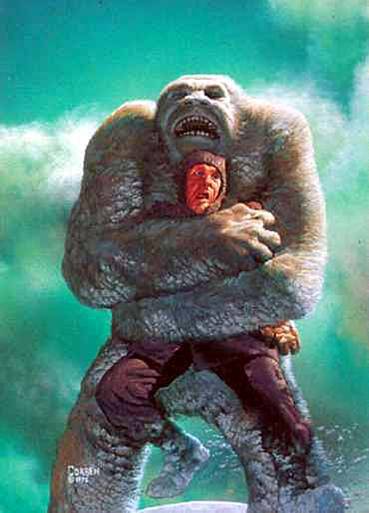 I really didn't think I was going to use it, but as I got crammed with day-job-work last night and didn't really have anything else prepared, the idea gained more and more steam. So here it is--feel free to add a caption, hockey-related or not, in the comments.

I haven't really written anything about the game I went to last Friday. You know, the one where I promised a Niedermayer return but instead got treated to the Ducks falling behind 5-0 to the Wild before deciding they were allowed to score goals in the game also. Well, that game certainly sucked, though I was able to do a lot of heavy drinking, plus some Ducks-related Christmas shopping during the 3rd period. I was really proud of one feat--despite not spending all of regulation in my seat, I managed to piss off both the person sitting directly in front of me (for being too negative about the 5-0 deficit) and the person sitting directly behind me (for standing for the last minute of a decided game).

Now I'm a guy who probably should be more apologetic for over-drinking at games, but even so, I refuse to take a lot of crap from Anaheim fans behind me too enamored with their seated view, especially since I'm not a guy who spends much time standing anyway. I usually have one of three comebacks ready for anyone with the nerve to tell me to sit down:

Yeah, it's not really that tactful, but when you're properly inebriated, it's fabulous.

Anyway, that's my roundabout way of saying that I'll be back at the Honda Center tonight for some redemption, (fortunately for some whiners) sitting in an entirely different section. Tonight, rather than sitting in the lower bowl, I'll be rubbing elbows with the rich kids in the 300 section. It's a pretty unique perch, actually, as I'll be in front of the Jack Daniels bar in the wheelchair row, wearing the green shirt as usual. Good news: Nobody will be complaining behind me if I stand up and cheer or jeer. Bad news: I'll have to be more careful than usual assuming that people's legs aren't broken. Dilemma: Should I utilize the waiter service or just walk twenty feet to the bar?

Prediction: Since Scott's return, the Ducks have allowed only one goal in two games, and that was on a shorthanded breakaway. It's really amazing--the guy takes six months off hockey and returns to be the best Duck on the ice for two games straight. Ducks 4, Avs 2. Goals by Getzlaf, Pronger, Pahlsson, and Bertuzzi. Drinky Sleek only pisses off one fan, but after a few more drinks all is forgotten.