Ducks Gameday—The long-awaited appearance of Sleek (oh, and Scott I guess too)

Share All sharing options for: Ducks Gameday—The long-awaited appearance of Sleek (oh, and Scott I guess too) 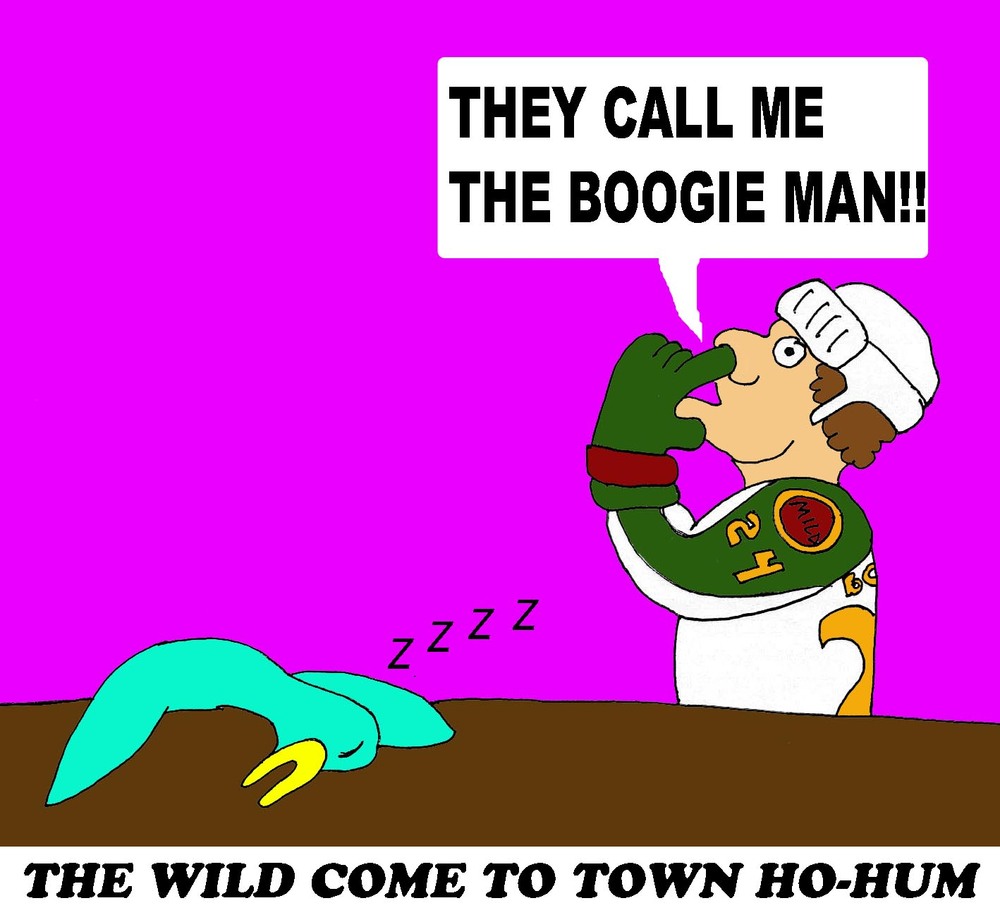 Lots to cover today, but let's start with the important shit: I'll be in attendance at the old Ponda Center tonight on a pal's ticket--224, row J, green shirt. First one to buy me a beer wins a friend for life.

Maybe just as importantly for the Ducks' success, though, will be the return of Scott Niedermayer. I can hear the naysayers now, "But Sleek, what about the tag issue? Nobody's been traded to create next-year-salary-space for a cap-that-has-yet-to-be-set through a rule-that's-just-silly-but-in-the-way-nonetheless."

Yeah, yeah. But I'm trusting Burke on this one; he'll put a bullet in some poor guy's head if it will make the Niedermagic happen tonight. I even got a karmic sign--the Ducks put 41 different cup pictures on their season-ticket pack, and this was the picture used for tonight's game ticket: 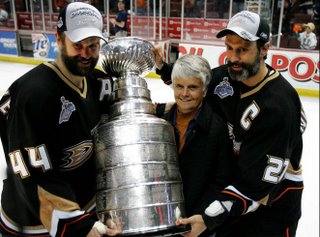 It's a conspiracy I tell you! The team was in on this pseudo-retirement all along! (e1)

Anyway, outside of the numbers, what does Scott Niedermayer really mean for a team that's had a long run of mediocrity? Well, let me throw the calculator away, take a deep drink, and tell you.

The Oiler guys at IOF in particular have me convinced that hockey is a forward-driven sport; that they are the ones that largely drive scoring events, and that assuming goaltenders and coaching are generally competitive the team with the better set of forwards will win more often than not. I think this holds true for a lot of teams, but Anaheim's in a strange boat.

Take our top line the last two years, for example. You've got Teemu Selanne, a guy who during the lockout was considered washed up in this league. Then there's Andy McDonald and Chris Kunitz, two guys who somehow never got drafted nor really were considered top-line material. Did they all of a sudden turn really good on their own, or were they legitimized on the ice by a blue-line difference maker?

The rest of the forwards last year also had their drawbacks; on the second line were three young kids Getzlaf, Perry, and another undrafted Penner. On the stopper line was a legitimate stopper in Pahlsson carrying around a Chicago-throwaway in Travis Moen and a career-disappointment named Rob Niedermayer. Todd Marchant and Brad May were also throwaways, yet somehow they all combined for a cup-winning squad. What gives? Why did this ragtag set of forwards dominate the regular season and playoffs?

The answer, in my mind, is the ability for Scott Niedermayer and Chris Pronger to elevate everyone's results, including even their own defense partners -- Frenchie Beauchemin and Sean O'Donnell, two guys other franchises didn't seem to want also. Largely I think this stems from each Norris guy's ability to singlehandedly transition from defense to offense; the forwards benefit from this support immensely. This season without Scott, Pronger has still demonstrated this ability, but it's largely in connection with the Pahlsson line defensive minutes; the top two lines haven't gotten any Norris benefit and thus they've had trouble outscoring their opposition like last year's top lines.

So my hockey philosophy, if you will, is that generally, a successful team gets built around its forward lines (and obviously goaltending). However, an alternative path to success can be achieved with the right kind of defensemen, provided they are the quality of player that can make their linemates better. I don't know if there are that many of those types of defensemen in this league, so to have two of them on one roster is certainly a rarity, one that I plan on enjoying for the rest of the year, at least.

We'll see whether Scott really does play tonight or how long it takes for this double-Norris effect to kick in; feel free to offer your Niedertheories on how well this team will finish the year. 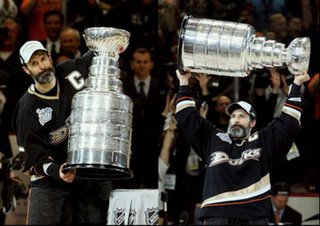 Scott's at least done a little heavy lifting this summer.

Interesting fact: The Ducks have as many points through 33 games as they did to start 05-06 (14-13-6). That Mighty Ducks team finished the rest of the season going 29-14-6 to earn the 6th seed, which shockingly earned them home ice in two rounds of the playoffs. This year the playoff-requirement is probably lower, but I'd sure like to see that kind of improvement.

Prediction: Ducks 5, Wilds 2. Goals by Sutherby, Kunitz, Bertuzzi, Pahlsson, and ______ Niedermayer. I'll fill in that blank later. Nobody buys me a beer, but I have a great time nevertheless.

p.s. I probably won't be doing anything for Sunday's Sharks contest, as I'll be offline all weekend. The Sharks are playing tremendous hockey lately, but I'll have a few more opportunities next week to talk about that.