The Ducks play so far has me frustrated. And you seem like the guy to help explain the frustration. I'm curious about ES TOI this year versus last year for the Duck's containment line. As yourself, I'm a huge fan of Pahlsson, but it seems like that line is getting more ES TOI this year. Could just be my imagination.

However, if it's true, then it might explain some of the drop off in scoring. And also point to a coaching phylosophy that needs to change. The Ducks need to dictate play, rather than react (by over-using the containment line).
Keep up the great work on the blog.

I'm a sucker for flattery, and yeah, I do have been keeping some spreadsheets for this sort of question, so without further ado, let's take a look at the forward lines for Anaheim, this year compared to last year. In a lazy move, I'm just using screen captures of Excel tables; hopefully they are all legible.

For the Ducks, it really makes sense to compare forwards by their on-ice responsibility, because I think context matters a great deal in Carlyle's strategy. The Ducks play a top scoring line against the opposition's top defenders, a stopper line against the opposition's top scorers, and a sheltered line that for the most part doesn't carry either responsibility. The tables below are meant to reflect that, and show each line's even-strength minutes per game, even-strength points per 60 minutes, and even-strength goal-differential per 60 minutes. I'll try to indicate numbers that stand out to me after each table. 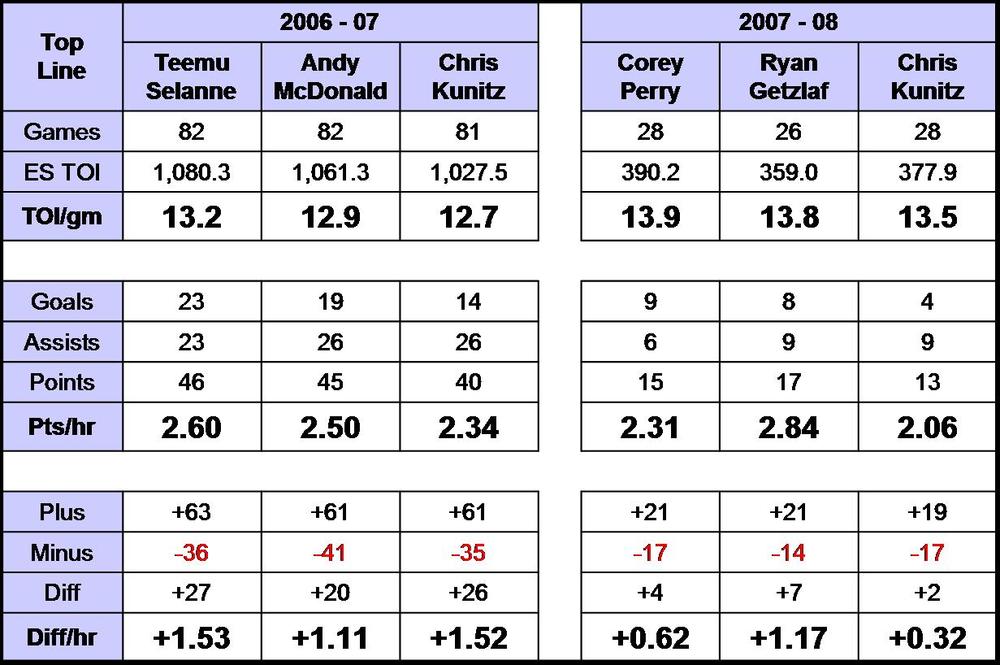 With the departure of Teemu Selanne, the top line minutes this year have gone to the kids--Getzlaf and Perry. In terms of even-strength TOI, it seems the top line is playing more than it did last year. The thing about this year's top line is that while their point production seems adequate when compared against last year, this year's version bleeds goals-against at a higher level than Selanne's line ever did. It's a fair concern, as it does put a lot of the burden of outscoring onto the other lines. 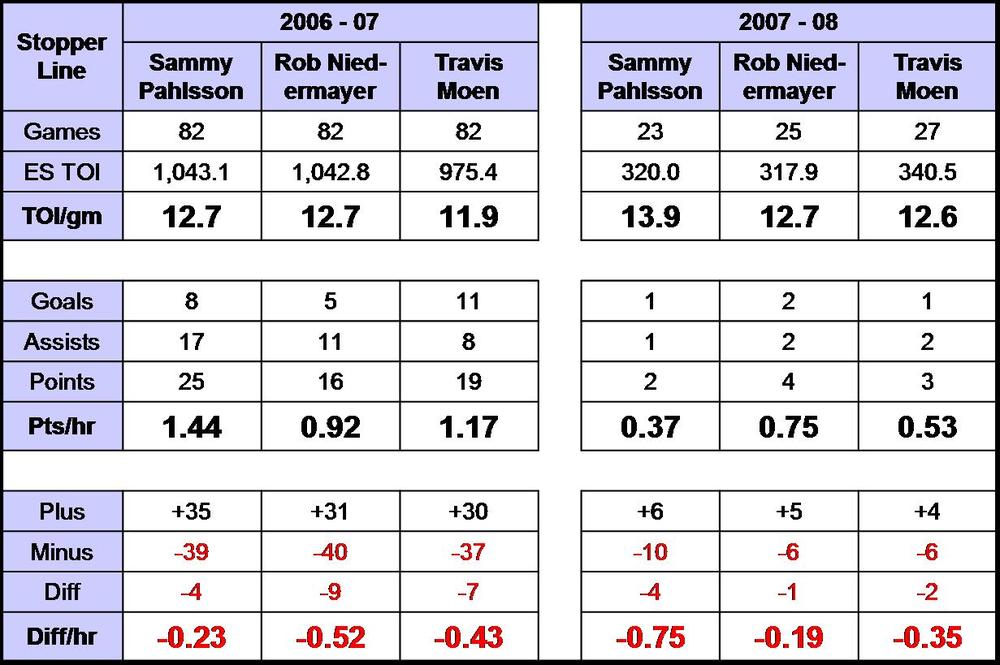 Unlike the other lines in this analysis, the stopper line continues this year without any change in personnel. In terms of Jeremy's question, we can note that the even-strength minutes-per-game have increased, and also noticeable is that the stopper line is scoring at a lower rate than they were last year. Even so, the rate at which the line gets outscored (quite a reasonable outcome considering the difficulty of minutes) hasn't changed a whole lot--the stopper line is still contributing like they did last year, though with a lower offensive output. 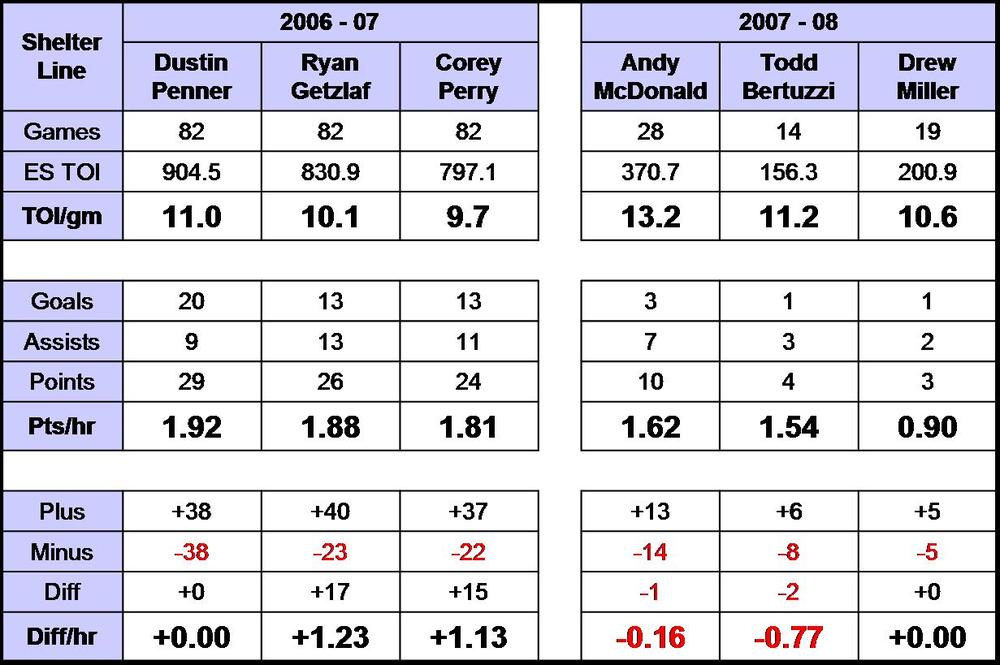 This is where things get a little shady, as this "second line" personnel has been fairly shifty this year, and even Dustin Penner last year wasn't a full-time member of the Getzlaf line. Still, this gives a sense of who's getting the easier minutes on the team and what's being done with them. A big reason for last year's success can be pinned on the fact that Getzlaf and Perry were able to dominate these minutes, something that McDonald and Bertuzzi, in particular, seem unable to do. These players, too, seem to have picked up some minutes-per-game, something we've seen on every line thus far.

A quick look at special teams: 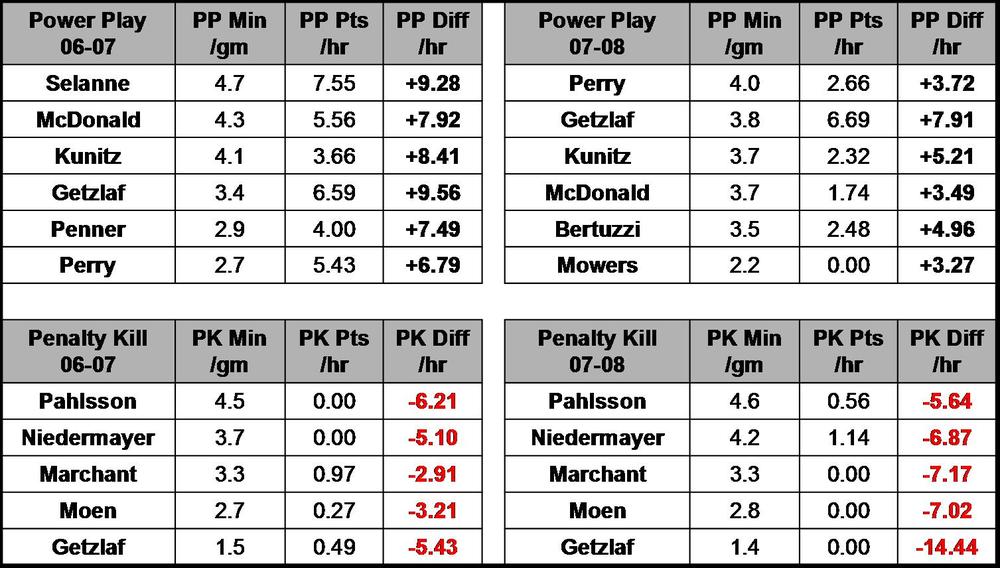 Here are each year's top minute-men on the power play and on the penalty kill. The power play scoring rates are obviously lower this year than last year, and a lot of that can be pinned on the 2nd unit's personnel--giving Mark Mowers and Rob Niedermayer power play time isn't in any winning coach's strategy book. Going by minutes, it seems that the Ducks have less power play time per game than last year, which probably correlates to the additional even-strength ice time we've seen on every line.

As for the penalty kill, the top pairing of Pahlsson and Rob Niedermayer seem to be as effective as last year, but the secondary unit of Marchant and Moen has seen a steep drop-off in goal prevention.

I think this analysis has been useful in seeing which minutes, in particular, seem to be preventing the Ducks from experiencing success similar to last year's. The problems that I can see are that the shelter line isn't finding a way to outscore soft competition, the top line is allowing more goals-against, and the stopper line could score some more goals. However, on an overall level I can't say that overplaying the Pahlsson line looks to be the Ducks' problem--that line, at least, has differential rates similar enough to last year.

Really, though, the Ducks' problem isn't really one that's explained through the forward minutes, I think. Certainly there are effects that come from personnel changes, but I think what's causing the dropoff more is the lack of a second Norris defenseman; last year these lines either had the benefit of usually a Pronger or a Niedermayer on their blueline, but nowadays Pronger minutes can only be distributed so far (usually in a defensive setting, as nobody else is really trustworthy). 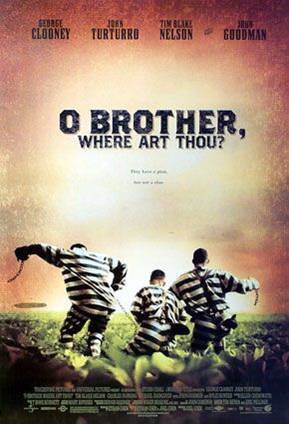 I have no idea what sort of team the Ducks would become if or when Scott Niedermayer rejoins the team, but I gotta think that a lot of these issues could be compensated by a blueline that's better at retrieving the puck and creating offense through transition. In that regard, TSN's Bob McKenzie has fantastic news for Ducks fans; Scott may be returning to the roster very soon.

If that happens, I'll gladly re-run these numbers after several games to see what effect another Norris defender has on the forward minutes. I'm not sure it can get back to last year's numbers, but I'll be happy for any improvement to what's become a rather mediocre team. In the meantime, I'll probably throw another post up pretty soon to show the defenseman minutes, where the Ducks' year-to-year dropoff will probably be more apparent.

Thanks for the question, Jeremy. As always, Go Ducks.