Share All sharing options for: Kings Gameday: The Golden Age of Enforcers?

(Busy day here at BoC, so make sure you check out Earl's gameday post below. It's got analysis, or some shit like that. Whatever, analysts say you can't drink at 9 in the morning, so what do they know?)

Yeah, yeah, the Kings can’t beat , whatever. I haven’t been worrying about it too much; instead, I’ve been considering that we might be living in the Golden Age of enforcers in the Pacific division. Every team has someone awesome who can fight, and each guy has a little something about him that makes him significantly cooler than the average hockey player. Look: 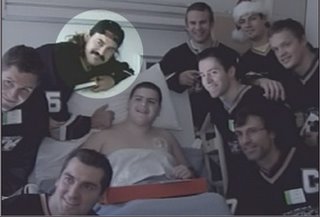 I think Parros is making that kid uncomfortable. Look how he's leaning away.


George Parros, Anaheim Ducks. The legacy of this guy is overblown, but there’s a reason people liked him in the first place. Moustache. degree. Long, wild hair. Comically bad balance. Likes Night Ranger, which is kind of like an even gayer version of Nelson. It’s kinda bandwagon now, but George Parros is still a pretty awesome guy. 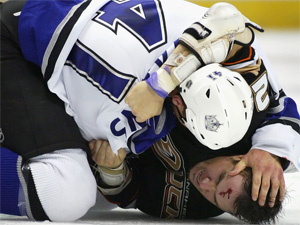 Raitis Ivanans, Kings. Raitis Ivanans took a Rob Blake slap shot to the face and did not get knocked out. He didn’t even fall down. He’s like Colossus if Colossus couldn’t turn into metal. I’d be afraid to talk to him, lest I somehow offend him and wake up trying to pick my teeth out of my crap. He can’t fight right now, but don’t worry, he’s making notes. He’ll be back.

Fucking , Sharks. I’ve been a fan of Dog Murray before he realized he needed to fight for his food, but he’s taken his awesomeness to a whole new level. Douglas Fucking Murray (as Meg pointed out, that sounds like two guys are having sex) owns a company, is Swedish, has a cool nickname ("Crankshaft"), and is unique because he doesn’t go around looking for fights. Dog generally fights when one of his teammates has been wronged, usually when someone goes after their knees (Dog HATES it when people go after knees). He’s a noble guy, and I dig that. 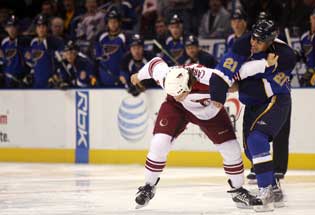 I'm half-expecting him to pull out a gun any second.

Danny Carcillo, Coyotes. I don’t know much about this guy, other than he’s smaller than anyone else on this list and that he’s a fucking lunatic. Seriously, I’ve watched Sean Avery, and this guy makes Sean Avery look like Jari Kurri. He belongs on the plane in Con Air, not on the ice. He may never fight any of the other big boys on this list, but I imagine he would in a heartbeat. Get this man some therapy. 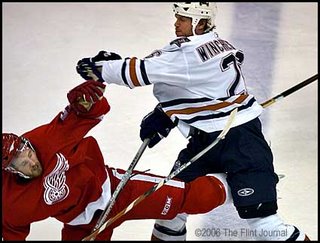 The Rifle, unloading on a Red Wing.

Brad Winchester, Stars. I almost didn’t put this guy on the list since he’s not really as cool as the other guys, but I needed him to finish the list. Plus, his name is Brad Winchester. I can’t hear his name without blurting out, "Awesome!" . That’s his last name. Even better, his nickname is "The Rifle." I would give either nut for the opportunity to be nicknamed "The Rifle." He could be a florist and I bet he’d be the baddest assed florist in the world. Work with blood orchids, or something.


So yeah, we're doin' pretty well in terms of enforcers. Who would you guys want on your team?