(Here's part II. Once again, feel free to make up your own and put them in the comments.)

Masterson Trophy- A trophy awarded to a player who would have quit hockey if they were smart but for some reason kept playing.

Slough-Footing- A joke penalty called by refs to check if anyone is paying attention.

Selke Trophy- This player plays the wrong position. Unsportsmanlike Conduct- The player used two or more of the following concepts in a single sentence - GENITALS/HOMOSEXUALITY/DEATH/MOTHER/FORNICATION.

Calder Trophy- This player’s career has peaked at age 20. 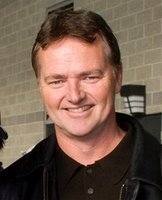 Streaky- European. (Specifically, Russian.) Visor- A device worn to protect a player's eyes. Real hockey players eschew them, because eyes are for pussies.

Maurice "Rocket" Richard Trophy- Awarded to the NHL's top goal-scorer each season. Created in 1998, the trophy was renamed the "Jonathan Cheechoo Trophy" in 2006. It was returned to its original name the following season. Shootout ()- A loss. Heavy Shot- Used in phrases like "it's not a hard shot, but it's heavy," this phrase can have no possible logical meaning, when you think about it. I mean, a puck has a set mass, and it has a certain speed when it is shot (how "hard" a shot is), and that's it. There aren't any other variables associated with a shot that could possibly be described with the word "heavy." "Not hard, but heavy" - WHAT THE HELL IS THAT SUPPOSED TO MEAN? "Does the little things well"- This player does the big things poorly.
Gritty- Sucks, but is Canadian. Franchise Player- The best player on a given team, this player’s relationship with a team’s fans will go through 4 stages: 1) Euphoria, where this player’s unlimited potential makes him untouchable in the eyes of the fans; any expressed thoughts of trading him will be met with scorn and attempted murder. 2) Optimism, where fans come to the realization that their franchise player is not the next Wayne Gretzky but should still easily become the cornerstone of consecutive Stanley Cups. 3) Disillusionment, the stage in which the fan’s unrealistic expectations become the fault of the franchise player. 4) Scorn, where fans revolt against their franchise player for his inability to fill the void in their worthless lives; he will soon be traded to another team for $.50 on the dollar. (Note: Boston fans, skip the 1st 3 steps and go straight to this last one.)

Prediction: Nashville is leading through 2 periods but gets contracted before the 3rd; the Kings still manage to lose.