I love messing with lines. When I’m bored in class or at a funeral I’ll usually tinker with the Kings’ line-ups from the past, trying to figure out if Vitali Yachmenev’s career could have been saved if only he had played with Kai Nurminen for just a little while longer. (God were we terrible in the late-90s.) With Frolov possibly coming back tonight, I thought it would be a good time to take a look at the options Crawford has going into the game. 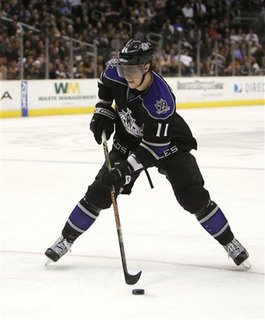 That's the best line: Kopitar by himself.

The first forward line, in my opinion, should be Brown-Kopitar-O’Sullivan. I’m pretty sure Cammalleri is still working through the groin injury he had a while ago, and besides, I really liked Irish’s hustle when he played with Kopitar. Keep Cammy on the power play, since he’s still effective there, but move him down to play with Frolov. Joining Cammy and Frolov should be Nagy. I know, you’re wondering, "But Rudy, who will play center? Also, I bet your penis is huge!" First of all, thank you, it is. Second of all, I figure just throw Cammy out there on face-offs and then let them figure it out. Cammy takes face-offs for Kopitar sometimes anyway, so I think he could handle it. If Nagy’s still hurt, throw some schmuck like Willsie out there and hope Cammy hits him in the face with a puck. 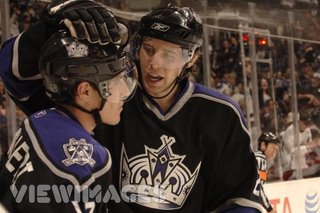 The third line would be constructed with the idea of being a stopper line, since Handzus has been kicking ass at it lately. (He completely shut down the Sedin twins last game, it was awesome.) I’d put him with Calder and Giuliano, who I hate but isn’t that bad if you just forbid him from actually skating with the puck. It doesn’t give Calder that much of an avenue to score, but I think this is the spot that’s best for him right now. The fourth line could be the "Rudy Kelly Memorial All-Stars" and be comprised of Thornton/Ivanans, Armstrong, and Willsie/Zeiler. (Jesus, no wonder this team is sinking with all this dead weight).

Of course, this whole thing could be easier if we called up Teddy Purcell. (I can’t remember another Teddy since , does anyone else? I think it’s pretty cool.) He could play with Kopitar, allowing O’Sullivan to move down and play with Handzus. That third line ain’t nothing to fuck with. Oh well, I guess Crawford needs his unskilled guys.


The defense is pretty good right now, I’d say. Crawford finally moved Lubo back to the right side and put him with Stuart, and I think that’s the right call. Lubo needs a guy like Stuart who is guaranteed to stay back; sometimes, I think him and Blake got confused about who was supposed to be jumping in and it led to odd-numbered attacks for the other team. Meanwhile, Bowlby has been put with Jack Johnson, and I think both have stepped up their physical game because of it. The third line is the traditional hockey fan’s favorite duo, Tom Preissing and Jaroslav Modry. The Kings used them effectively in the last game, though, putting Modry on the penalty kill with Blake and putting Preissing on the power play with Stuart. Stuart and Blake play both special teams while Johnson and Lubo play more 5-on-5, allowing them to make use of their ability to jump in. All in all, good stuff. Nice work, Crawford. 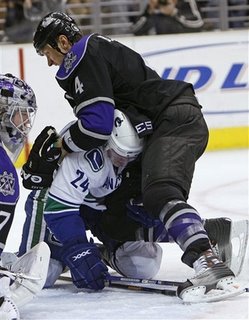 I don’t know, I still can’t bring myself to get too worked up about where we are. We’ve been playing pretty well recently without our top scorer and our #1 goaltender; once those two get back, I think the Kings are going to kick a lot of ass. Except for , we’ll probably still get stomped by them.

, meanwhile, is starting to falter after being one of the surprise stories of the early season. They’re just a little too old on defense and a little too young on offense to keep it together over a full season, methinks. Besides, they have this guy as one of their superstars: 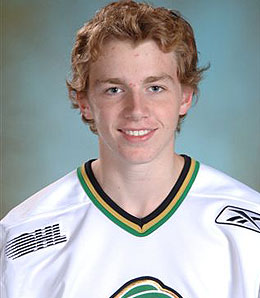 Do you think he wears special shoulder pads to protect his supple breasts?

I’m sorry, but there’s no way he’s a real hockey player. He’s more likely to be date raped than to win any battles in the corner. I wouldn't be surprised if there was some sort of Mulan thing going on. You know what he looks like? He looks like a girl Dustin Brown would drunkenly fuck and then never call again when he realized what he'd done. That’s not what you want your best player to look like. (In my experience they should look like a raccoon.)

Prediction: Kings win, 4-3. Goals by Kopitar, Willsie, Preissing and Brown, who gets angrily confronted by Kane after the game; the two will end up sleeping together again tonight. (Now that’s a prediction!)

Update: Okay, everyone needs to go to the Kings website and watch their all-star video, if only to see Lubo say the only two words he knows in English: "Vote" and "Cookie."