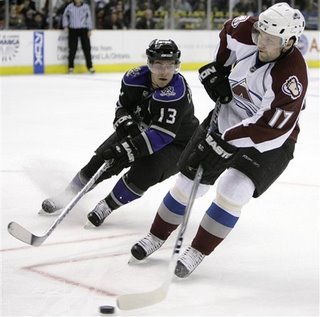 
I promised a live-blog tonight so you guys can look forward to that, but first I wanted to tide you over with a few quick-hits:


-The Kings called up forward Gabe Gauthier and goaltender Johnathan Quick and sent down Matt Moulson; they also retroactively put Frolov on the IR just to try to confuse everyone a little more. Basically, Frolov and Labarbera will be back after tonight's game but they wanted Quick to back up Aubin tonight. Gauthier is probably up instead of Moulson because they wanted someone with more defensive presence since Moulson had been playing with Handzus and Calder.


-There's a quick little review of the Kings' junior prospects up over at Hockey's Future if you're interested. You get a lot of good little nuggets of information, including, "Josh Kidd was diagnosed with 'osteitis pubis' in November, which is an inflammation of the tissue connecting the two bones that make up the pelvis, and will miss at least a month of action." Okay, so I guess there's 3 injuries you can miss hockey with. Christ. 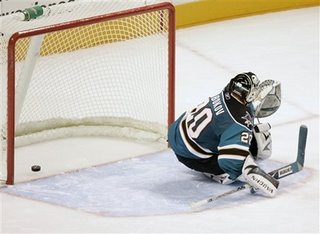 This picture is irrelevant, it just makes me laugh.

-The last game against Colorado was a good example of why it's sometimes a better idea to just sit a game out. Both Mike Cammalleri and Jaroslav Modry played despite extenuating circumstances (Cammy's groin, Modry's dad). Both played poorly, with Cammy ineffective and Modry responsible for 2 goals against. (Not the breakaway, though; I'm pretty sure that was Moulson's fault.) I know they just wanted to help the team and a big part of hockey is playing when you're not 100%, but ultimately they hurt the team. I just want them to understand that.


-I was at work today and we had cake for some unexplained reason. I work with pretty much all girls (it's not nearly as awesome as it sounds) and we were talking about some Secret Santa bullshit they want to do again this year. One girl mentioned that last year I got this chick Melissa that I work with Midol. Melissa has since moved back home because she got knocked up, so I replied, "Apparently I should have gotten her birth control." For some reason, that makes me an asshole. I don't get women. Anyway, here's Jim Gaffigan talking about cake and other delicious foods if you're bored. My favorite:


Every now and then I'll read a book, I'll be so proud of myself, I'll try and squeeze it into conversation. People will be like, "Hey Jim, how ya do-" "I read a book! Two hundred and fifty pages!" "That's great, what was it about?" "No idea! Took me two years!"