Kings Gameday: Who Would You Disappear?

Share All sharing options for: Kings Gameday: Who Would You Disappear?


The Kings have a lot of dead weight laying around. They have 2 players in the AHL, Peter Harrold and Ted Purcell, who have clearly shown that they deserve at least a few games in the NHL. Who’s going to make room for them, though? Depending on what kind of team you’re looking for, at least one of the following players is unnecessary. Which one would you disappear?
Kevin Dallman Pros: Can play offense and defense… still relatively young… available to play the point on the power play… his last name sounds like a really shitty Batman villain. Cons: Sucks… he’d never actually play defense (we’d just call someone up)… offensive defenseman, which we don't need... this is his only picture available on Yahoo!: 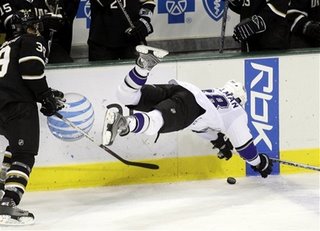 Raitis Ivanans Pros: Fights… one of the better enforcers at actually playing hockey… has not killed a person yet (that I know of). Cons: Sucks… can’t fight right now, which makes him worthless… takes bad penalties… always a possibility that he’ll learn how to read and find all the bad things I've written about him.
John Zeiler Pros: Physical… makes a lot of noise when he plays… looks like he has a stick up his ass when he skates… can draw penalties… he looks like a guy I played college hockey with. Cons: Sucks… falls all the time… his hits have no affect on the play whatsoever… has a two-way contract so not subject to waivers... kind of a jackass… I was never fond of that guy from college.

Pros: Good energy… effective on the penalty kill… can also help shut down other scorers… young... his face is quite humorous. Cons: Sucks… has a two-way contract, so not subject to waivers... so poor at stick handling I wonder how he can piss properly… he made me write that last comment… honestly, look at his face: 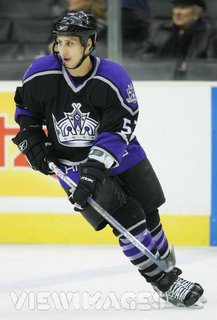 Pros: Umm... is not a cannibal? Cons: Sucks… takes bad shots… no special teams ability… his blood burns through steel… not too sure about the cannibal thing.

Pros: Physical… good character guy… leader and elder statesman on the team… can fight… looks fetching in bike shorts. Cons: Sucks… slow… no special teams ability… makes $1.5 mil…might have to get rid of him just to keep Crawford from putting him on a line with Kopitar… seriously, what the fuck… that’s ridiculous.

So, who would you waive? Ultimately, I think you have to go with Brian Willsie. Each of the other guys brings something that another can't: Dallman brings options, Ivanans will eventually instill fear into the hearts of men again, Zeiler instills energy, Giuliano gives Kopitar a rest on the penalty kill, and Scott Thornton provides leadership in the locker room. What does Brian Willsie bring? I honestly don't know. I know it's harsh, but I really don't think he's doing anything that a 22-year-old Ted Purcell couldn't do much better. Sorry, Brian; good luck in Europe next year.

This doesn't have anything to do with anything, but doesn't Joe Thornton's beard make him look like Snarf from Thundercats? Here's Joe (left): 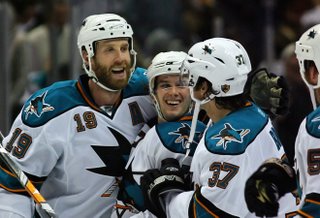 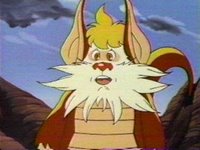 Prediction: The Kings are the worst team in the league and they're playing Detroit, the best team in the league. Obviously, Kings win, 7-1. Goals by Brown x2, Frolov x3, O'Sullivan and Handzus. I've never been more confident in a prediction in my life.