Looking back at one of the dumbest trades in NHL history

Share All sharing options for: Looking back at one of the dumbest trades in NHL history

In the spirit of Christmas, I thought it would be appropriate to look back at one of the dumbest trades of all time. Indeed, on Nov. 30 2005, the Boston Bruins foolishly gave away the most hyped player since Eric Lindros (at least when Jumbo Joe was drafted) for a buncha schmoes.

"Joe for schmoes" read the headlines.*

So, in commemoration of this wonderful, Hart trophy-sized gift, let's follow the careers of those who were involved in this painfully idiotic trade. 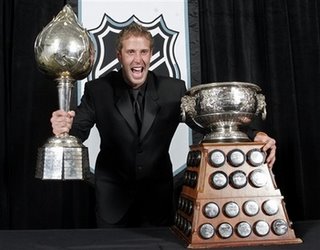 That picture really has to hurt Boston Bruins fans. I mean, seriously, look at how happy Joe looks.

And, even though he certainly could grow some playoff balls he does have 20 pts in 22 playoff GP with the Sharks. So, even though his numbers take a bit of a dive when the games start to matter, he has improved...compared to when he was an ineffective Bruin. (Wow, I'm pouring a lot of salt in that wound. Yikes.)

I'm sure one of the three(?) SJ bloggers could wordsmith and pontificate about Big Joe's greatness during his time wearing increasingly ridiculous Sharks jerseys better than I, but he certainly has made a positive impact. He signed a Sidney Crosby-like manageable contract to give the Sharks cap flexibility and will keep them as a contender for at least the next 5 years.

Sure, the Shawwks did make it to the WCF that pre-lockout year without Joe, but few would argue against the point that Big Bird raised the team's ceiling substantially. He also made Jon Cheechoo a multi-millionaire.

Good deal for the Sharks, yes?

Brad Stuart, at least from my memory, was the "blue chip" player who somehow justified the Bruins to push the red button on the Big Bird firesale. Matt at Battle of Alberta did a good job of capturing the vague talents of Stuart last February.

Since the trade, Stuart has yet to complete a full season with the same squad (though we're pulling for him to stick with the Kings). He was a dreadful -22 in just 48 GP with the Bruins, bounced back with a +12 in 35 GP with the Flames and sits at -12 with the Kings this year.

What does that tell us?

He's a bit player, but who knows, maybe someday he'll have a Van Halen-style eruption. As the #3 pick by the Sharks in '98 he's certainly been a disappointment. Every now and then, early draft picks end up "getting it" later than many hoped. But I doubt the Sharks really miss Stuart.

Unlike the underachieving Stuart, Marco stuck with the Bruins. He recently signed a four-year extension with the Bruins and seems to be the only player the team can even point to as being a "success" in the deal.

It's hard to pick on Marco too much, even if he hasn't done as much as some might expect from him. He's a speedy winger but he's somewhat on the smaller side. He's probably going to stay in the point-every-other-game-or-so range for most of his career.

Wayne Primeau was a throw-in to the deal, a mediocre two-way center with a good attitude. A locker room guy. Who is now a decent fit in the Calgary Flames locker room.

So, not even three full seasons later, all the Bruins have to show for is a solid, hard working forward in Sturm. But, hey, it's not like Thornton is one of the top 5 forwards in the NHL, right?