BoC Gameday—Scott makes everyone look better (except himself)

Share All sharing options for: BoC Gameday—Scott makes everyone look better (except himself)

The table below only covers even-strength play (5-on-5, or 4-on-4, or with a goalie pulled, or whatever), and here's what it contains. In the columns to the left are the even-strength results for the 34 games before Scott Niedermayer joined the team; the columns to the right are the same results for the 12 games since. In each set, you can see the even-strength minutes, the goals-for per 60 minutes, the goals-against per 60, and the goal-differential per 60. The very last column shows the improvement, and everything is sorted by the second-to-last column (goal differential since Scott's return).

Here's the key point, or at least the thing I wanted to emphasize. If you look at the "Change" column, note that every single Duck has improved his even-strength results since Scott's return, but check out the bottom line: Not only is Scott the worst even-strength performer since his return (by the goal-differential metric), but he's the only one not to be an improvement over previous results. 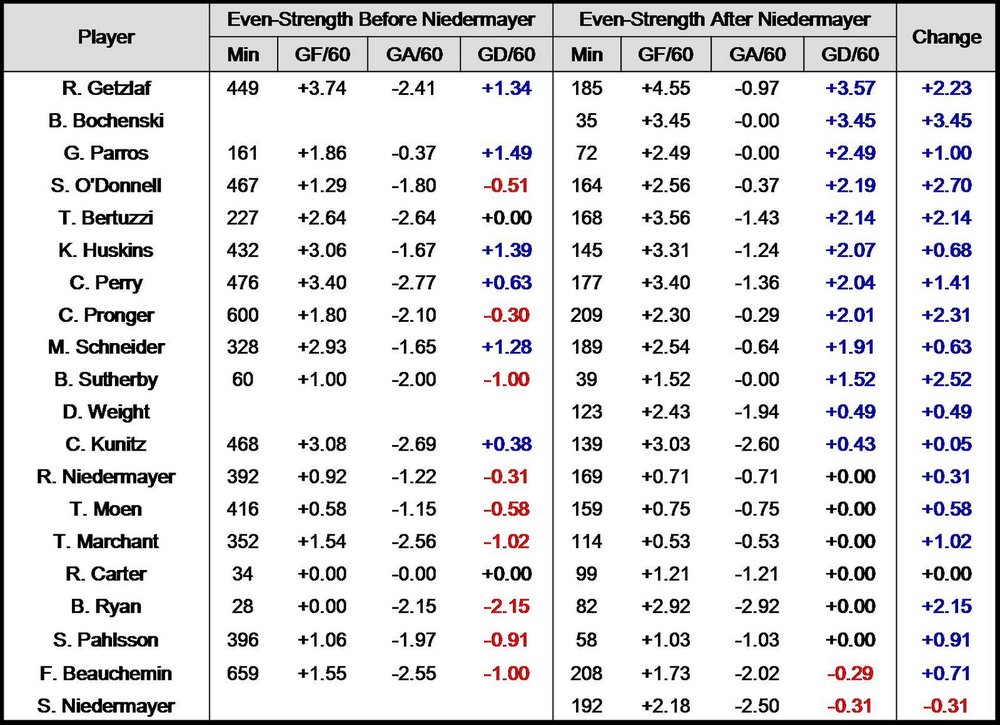 Now, to be clear, the Ducks have vastly improved their special teams play over the last dozen games as well, and Scott has much stronger metrics on both the PP and PK, but at even-strength, it's a bizarre trend. Essentially the addition of Scott has enabled the tough results to fall on his own back, enabling the rest of his teammates to enjoy more fruitful results.

Anyways, there's plenty in that table worth looking at or discussing in the comments, if you're so inclined.

Meanwhile, the Sharks roll into town tonight in what should be a real special game. I was a bit surprised to note that in calendar year 2007, the Ducks went 7-1-2 against the ever-scary Sharks (two wins by shootout, 28 GF, 18 GA), including 2-0-1 at the start of Scott's return. Still, this one-sidedness doesn't mean that tonight's game is decided by any means; since their last defeat to Anaheim in December, the Sharks have gone an impressive 7-0-1 (23 GF, 14 GA). Really this seems like a collision of two juggernauts, which is always a pleasure to watch.

And watch it I shall, as my kid brother and I will be in the Honda Center tonight. Once again, we'll be up in the exclusive 300 level, sitting in the wheelchair row in front of the Jack Daniels club (same seats as the Colorado game), as always sporting my lucky green shirt and helping promote Anaheim's alcohol sales industry. That Colorado game I ended up really smashed, partially with the help of BoC readers, and barely noticed the Ducks dominating play below me. This time I plan on being a little less aggressive on the ol' liver, but if anyone wants to stop by and make a tradition out of Sloppy Sleek, I doubt I'll put up much of a fight.

Prediction: Could this game really be the return of Sammy Pahlsson? I've heard rumblings that it may be so. Ducks 4, Sharks 2. Sammy scores 'em all.