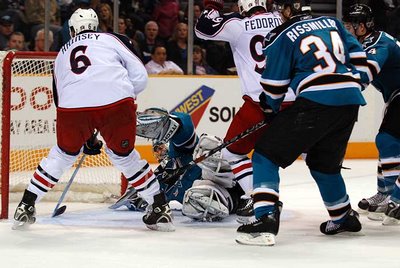 I think Patrick Marleau and Ron Wilson need to go on an episode of Celebrity Deathmatch or something to work out their "issues" (or hell, call a freakin' marriage counselor or something). I noticed yesterday that Captain Patty wasn't on the ice for a good portion of the third period, though he did go out to congratulate Evgeni Nabokov once the game ended, killing any sort of injury theory.

No sir, our dear captain's ass was benched for the better half of the third period. In fact, according to the NHL's play-by-play log (since they got rid of the damn shift chart thing that was pretty awesome), the last time Patty was on the ice was during the BJ's second goal. After that, he might as well have been warming his mitts in Ralph Wilson Stadium, it's better than sitting his ass down in Ron Wilson's Doghouse.

Two schools of thought on the second goal: it's hard to blame Patty since he's got a broken stick, but at the same time, the iso-cam showed him hustling back to get a stick, but then kinda floating into the play. It's hard to judge whether or not he was just being lazy/stupid or if he was taking the winger's position at the point -- we'd need an overhead cam to get the whole picture for that.