Daydreaming about the 2008 playoffs...

Share All sharing options for: Daydreaming about the 2008 playoffs...

After watching PJ Swenson’s great Stanley Cup interview and with the (weak) hubbub surrounding the NHL All-Star game, I couldn’t help but think to a few months from now when the games start to matter again.

With all that in mind, I thought it would be fun to conjure up the most appealing Western Conference playoff matchups that are within the realm of reason (sorry Kings and Oilers fans).

vs. After all these years, the Red Wings still are the gold standard of the NHL and Joe Sakic is still considered the face of the former Nordiques franchise (even if this season is marred by injuries). But chances are, at least in the case of Quoteless Joe, that the times will be changing soon enough. So wouldn’t it be nice to watch one last battle of the NHL’s greatest modern blood feud? Hell, maybe we can even get Claude Lemieux to turtle on the ice during the ceremonial first drop of the puck. For the record, if the playoffs started today, this would be the first round pairing. Minnesota/Columbus vs. 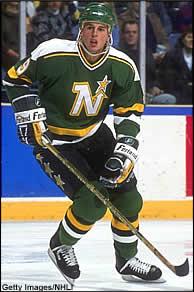 I lump those two teams together for a simple reason: both teams bring Ghosts of the Stars Hockey Past. The atmosphere in when the Stars came to town during the playoffs, with former North Star (can you believe he actually skated with an N on his jersey at one point?) Mike Modano would be surreal. And that would be good, because aside from a Ribeiro deke here and a Gaborik breakaway there, the games would probably be bland enough to put Mario Lemieux in a trap induced coma. The Columbus Blue Jackets would bring The Ghost of Stanley Cup Past in the form of former head coach Ken Hitchcock. Could the formerly mustachioed former coach lead his ragtag group of upstarts past his older, more talented former team? That would be an interesting storyline, no doubt. vs. The best team in the league against the league’s best goalie…it really doesn’t get much better than that. Also: could the Sedin twins use their super secret Swedish doppelganger tricks to bedevil mechadefenseman Niklas Lidstrom? (No) vs. Joe Thornton vs. Jarome Iginla; Kipper vs. Nabby; Mike Keenan vs. Ron Wilson; a big, talented offense against a big, tough defense. This series would feature enough contrasting elements that people would grow ill from Irresistible Force vs. Immovable Object references. vs. It would be a travesty if the best series from last year’s playoffs didn’t take place again. If I were a gambling man, I would put money on that being the WCF for a second year in a row. Who would win? That’s hard to say. But the Ducks would have the man curse that is Bertuzzi on their "side" this time around. As great as all of these matchups would be, the only battle that has to happen is the one you saw coming a mile away vs. This needs to be the year that the Battle of California takes place. Come on guys, seriously. Stop teasing us.